The absence of any questions on the issue by moderators Abby Phillip, Wolf Blitzer and The Des Moines Register’s Brianne Pfannenstiel  did not go unnoticed on Twitter where several users questioned why there were still no questions immigration even as the anti-immigration policies of Donald Trump continues to impact millions of immigrant lives.

“Still no questions about abortion or reproductive health, climate change or immigration,” tweeted @JordanUhl as Jennifer Medina added: “In a year where Latinos could be the largest non-white voting bloc, there’s so little attention to this. And nothing about immigration either. Obviously, those aren’t only issues Latinos care about, but the absence is striking.”

Erika Andiola added: “We could potentially be losing our #DACA this year (any time at this point when SCOTUS makes a decision) and there’s still absolutely nothing on immigration?”

The complete snubbing of immigration by moderators came as the group, United We Dream Action, held a protest outside the Democratic Debate at Drake University in Des Moines, Iowa to send an important message to former Vice President Joe Biden to “commit to protecting immigrants by putting a stop to all deportations within his first 100 days in office!” 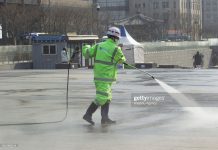 Jamaicans Among 65 ICED in New York

Nicaragua is on the path to becoming the next Venezuela