News Americas, FORT LAUDERDALE, FL, Fri. Mar. 13, 2020: The Pew Center released some interesting data last week, which again proves why Donald Trump and the GOP have focused so much of their attention on limiting immigrants in the USA.

According to Pew’s research from Abby Budiman, Luis Noe-Bustamante And Mark Hugo Lopez, more than 23 million U.S. immigrants will be eligible to vote in the 2020 presidential election.

You read that correctly. That means that one-in-ten U.S. eligible voter this November, will be a naturalized citizen. Is it any wonder Trump and his legal defense team, aka the US Department of Justice, have launched their Denaturalization Unit?

Now here are some reasons why Trump’s DOJ is moving in this direction:

Again, according to Pew Research: “The number of immigrants living in the U.S. has increased steadily since 1965, when the Immigration and Nationality Act became law.

Now there’s some more data that is definitely leading to the Stephen Miller-Ken Cuccinelli ‘Brown and Black Immigrant Extermination Plan,’ or as I creatively call it, #BIEP, – pronounced BEEP – so Trump and his cohorts can get really anxious and jump like they’re running from the coronavirus when they hear it!

Now here’s another gold nugget from this fascinating research – almost like waving a red flag at a mad bull.

Budiman, Noe-Bustamante and Lopez, using Census Bureau data, found that by contrast, the U.S.-born eligible voter population grew slower at 18 percent over the same period – from 181 million in 2000, to 215 million in 2020. That’s a difference of over 8 million when compared to the immigrant voting growth.

Most of all, most of the immigrant voters are either Hispanic or Asian, though they hail from countries across the globe. Key fact though: they are non-white! No Norwegians or Brits; very infuriating for DT and his White Nationalists BEEPers.

Now here are some more facts that is undoubtedly behind the Trump Wall, Trump Cages and Trump BEEP Plan – immigrants from Mexico make up the single largest group, at 16% of foreign-born voters.

No wonder Trump wants to keep Mexicans and Latin American immigrants out. and scream at them that “the country is full.”

But there’s still more to infuriate El Trumpeto and his base of deplorables, afraid of losing power and terrified of the ever-increasing darkening of America.

The same Pew data says the “a rising number and share of immigrants living in the U.S. have naturalized in recent years.”

But White immigrant eligible voters are only 4.8 million, the third largest racial and ethnic group, making up 22 percent of the immigrant electorate. Compare that with nearly two decades ago, when white immigrants made up 30% of foreign-born eligible voters, a higher share than that of Asians and comparable to that of Hispanics at the time.

Now do you understand the whole MAWA push and why Mick Mulvaney was appealing for immigrants from Britain?

Hopefully black and brown immigrant voters across the country will wake up from their stupor and vote like they’ve never done before this November.

That is, before they lose the right to vote all together. Trump and his Denaturalization boys are hot on the case. Don’t say I didn’t warn you! 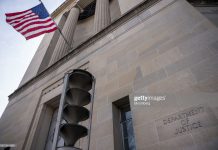 Denaturalization – Another Reason Donald Trump Should Not Be Re-Elected