The Trump proclamation honored the 11th anniversary of the month which pays tribute to Caribbean immigrants and their contribution since slavery to these United States.

The irony of the Trump proclamation was hardly lost on this writer, especially as it comes at a time of great unease for the Caribbean and immigrant community across the country.

It comes at a time when the U.S. Immigrations and Customs Enforcement agency, (ICE), has boosted of increased deportation rates, stating in a report recently that it’s deported some 41,000 immigrants in 100 days back to their countries of birth, especially to Latin America and the Caribbean.

While ICE continues following the Trump executive orders of January, rounding up and deporting not just criminal immigrants but immigrants whose only crime has been to live in the U.S. without legal working papers and his Department of Homeland Security threatens to repatriate 58,000 Haitians back to Haiti next January, Trump’s National Caribbean-American Heritage Month Proclamation pays tribute to America’s greatest undocumented immigrant – Caribbean native, Alexander Hamilton.

“Throughout our history, Caribbean Americans have helped create and maintain the strength and independence of our Nation,” the proclamation reads. “Alexander Hamilton, who came from poverty in Nevis, was a key contributor to our Constitution and the first Secretary of the Treasury, helping to establish our modern financial system and to create the United States Coast Guard.”

The irony, however, lost on the man who Tweeted a word that does not exist – that is ‘covfefe’ – is that Hamilton was undeniably an undocumented immigrant.

The Nevis-born Hamilton, who went on to become an American statesman and one of the Founding Fathers of the United States, simply arrived in mainland USA from St. Croix, Virgin Islands in 1772. He did not have a visa, or a work permit or a greencard, but history tells us he merely entered the mainland and began studying here.

And like many immigrants, Hamilton struggled and then strived and excelled, much like millions of undocumented immigrants today are doing and seeking a chance to legally keep on doing.

In identifying and paying tribute to this Caribbean son, Trump has ignorantly or hypocritically chosen to ignore the fact that Hamilton was also an undocumented immigrant.

And while Trump has chosen to “encourage all Americans to join in celebrating the history, culture, and achievements of Caribbean Americans with appropriate ceremonies and activities,” tens of thousands of Caribbean immigrants are living in fear of being arrested and deported back to countries they barely know.

For the anti-immigrant, bigot in the White House to pay tribute “to the culture Caribbean Americans have shared with our Nation and the many contributions they have made to our society” is not only ironic, it is downright nauseating and even Hamilton’s bones must be turning over from this despicable display of hypocrisy. 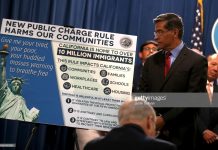