News Americas, PORT-OF-SPAIN, Trinidad, Fri. Oct. 24, 2014: Daniyelle Bennett of Glenco, Trinidad and Tobago, is what you would call a ‘super’ kid.

At age 12, Daniyelle is already an actress, a singer, a triathlon winner and a competitive karate winner.

The Trinidadian-American is now using her sports competitions as a way to spread the message of childhood obesity to other kids in Trinidad.

Daniyelle took this message to Boston, MA and Westchester, NY recently where she competed in both sports.

In Boston, Daniyelle was the winner of the first Pilgrim Man triathlon on Saturday September 27th in Plymouth, MA. In Westchester, the 2nd degree karate black belt champ was part of the Shotokan karate international federation Trinidad and Tobago (SKIFTT) that represented this country at the 20th annual New York Open traditional karate do championships on October 12th at the Westchester community college in New York.

Daniyelle, who has been doing karate since age 4, was second in her competition, after being bested only by the U.S. National champion. 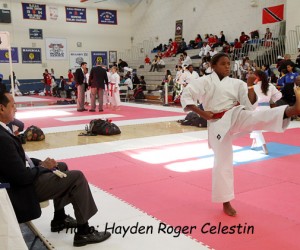 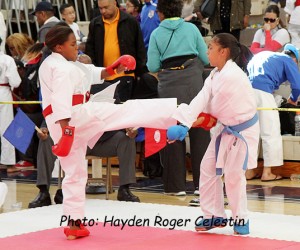 At each event she passed out informational pamphlets on the dangers of childhood obesity and urged children to get and stay active.

A study published by the University of the West Indies (UWI) on overweight children showed findings of a high risk of development of diabetes and hypertension among younger Trinidadians.

Dr Anjani Sharma, research medial officer with the Ministry of Health in T&T said recently that obesity among children is an epidemic in Trinidad and Tobago.

“I started this when I heard Trinidad had the most obese people in the world,” Daniyelle told NAN recently. “I thought this was ridiculous and wanted to do something about that. So I began by asking kids who come to the competition if they are active and tell them how they can go out and play a little sports and be home texting or eat KFC. Have some balance as it will help you with school work and life.”

The 7th grader at the International School of Port-Of-Spain who wants to be a medical doctor when she grows up, is now focused on taking her message to a triathlon in Tobago on Nov 8th where she will be competing.

On the Political Football Issue of Immigration, the Republican Party Must Not … –...