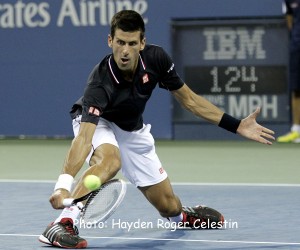 News Americas, FLUSHING, NY, Fri. Aug. 5, 2014: It will be THE showdown of the Open tomorrow, as Kei Nishikori gets ready to face, No. 1-ranked Novak Djokovic of Serbia.

The two will clash in the semi-finals of the U.S. Open, having not faced each other since 2011.  Djokovic clearly is looking to retain his Open title and is in fine form, having made the most of the occasion Wednesday to stretch his career advantage over Andy Murray of Scotland to 13-8 with what became an early morning 7-6, 6-7, 6-2, 6-4 win.

It is Nishikori of Japan’s first Grand Slam semifinal, having toppled the third seed Stan Wawrinka, the Australian Open champion and a semifinalist at last year’s US Open, 3-6, 7-5, 7-6, 6-7, 6-4, on Wednesday.

Djokovic is one of only four players to reach eight consecutive US Open semis, joining Jimmy Connors, Ivan Lendl and Roger Federer. The question now is who will prevail tomorrow to secure a spot in the finals?

Jamaican-Born New England Patriot For Yet Another Super Bowl