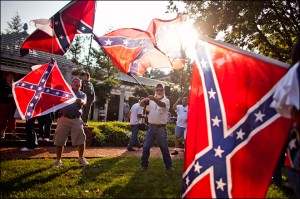 News Americas, NEW YORK, NY, Fri. June 26, 2015: On Tuesday June 16th, Donald Trump announced in New York, home to 44 hate groups, that he will run for President, with a diatribe against Mexico. He accused the country’s leaders of sending drugs, criminals and rapists to the U.S.

On Wednesday June 17th, Dylann Storm Roof, 21, walked into the Emanuel African Methodist Episcopal Church in Charleston, South Carolina. After one hour in bible study, he took out a .45-caliber gun and murdered nine black men and women after reportedly saying: “You rape our women, and you’re taking over our country.”

On Tuesday last in New York City, Trump insisted he will build “a great, great wall on our southern border” to essentially keep out the immigrants.

On Wednesday last, Roof, after shooting black church goers said reportedly: “… you have to go.”

Are you starting to see the similarity in this hate filled rhetoric? Hillary Clinton no doubt shares my thinking as she is quoted as saying: “Public discourse is sometimes hotter and more negative than it should be, which can, in my opinion, trigger someone who is less than stable. I think we have to speak out against it. Like, for example, a recent entry into the Republican presidential campaign said some very inflammatory things about Mexicans. Everybody should stand up and say that’s not acceptable.”

The difference is that Roof took action after immersing himself in similar rhetoric coming out from White Supremacist hate groups.

Like Trump and many right wingers, they believe America’s Whites are fast becoming a minority and blacks and immigrants are “taking over.” Like Trump’s campaign against President Obama’s birth certificate and now his diatribe against Mexico, many believe blacks and immigrants are ascending to levels of power that must be curtailed. To put it mildly: “these boys need to be kept in their place.”

According to the Southern Poverty Law Center, since 2000, there’s been an increase in the number of hate groups in America “driven by a backlash to the country’s increasing racial diversity, an increase symbolized, for many, by the presence of an African American in the White House.”

So while we decry, mourn and analyze what happened in South Carolina on June 17th; while we talk about police abuse of black women like in Texas and the continuous killings of black and Latino men by cops across America, let us turn our focus to the bigger issue – the one where hateful rhetoric is being spewed into the airwaves and online daily.

Many turn a blind eye to this simply because it’s dismissed as a “constitutional right” to free speech and the spewers simply as entitled to their “political opinion.”

But should not the vipers that spew the venom be held accountable too? Especially since their poison is being drunk like Kool-Aid by many young ill minds of their own race, who then feel the need to take action like Roof did last week.

Donald Trump like many anti-immigrant, bigots on the rights should be held accountable for stirring the pot of hate with their diatribe. They may not put the gun in the hands of the home grown terrorist like Roof but they sure fan the flames. We must speak up and let them pay at the ballot box in 2016. Let us show immigrants and blacks are a majority in the country and we are here to stay no matter how many of us you kill in between.

Jamaica Has Date With IMF