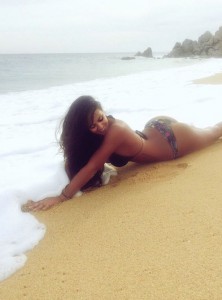 News Americas, LONDON, England, Mon. July 6, 2015: German-born, Jamaican roots tennis player Dustin Brown’s reign at Wimbledon has ended just days after his triumphant win over Rafael Nadal. But while Brown may be out of the tourney, off court he remains a major winner, especially in the eyes of sexy girlfriend Dionne Gonzales, 33.

Gonzales is considered one of Las Vegas’ hottest party girls – and actually gets paid to party at the famous Wynn Encore Hotel. After Brown’s win last week, the love-struck model was celebrating while working at a Vegas Champagne bash.

She took time out to tweet: “When bae is happy, I’m happy. Well deserved mi amor!”

It’s a far cry from the days of Brown running around in a Volkwagen camper, struggling to make the game pay while restringing other players’ rackets for five Euros a piece.

Brown’s twitter followers grew by more than 10 thousands since last Thursday in the lead up to his match with Serbian Viktor Troicki. He has certainly scored his own following of “Dreddy Tennis” fans.

And while on Saturday the dreadlocked German was unable to follow his triumph over Nadal when he slumped to a 6-4, 7-6 (7/3), 4-6, 6-3 defeat to Troicki, Brown has a message for all those doubters.

“Every1 Thats Talkin About A #1HitWonder… Plz Get Ur Facts Right -> #2HitWonder,” he Tweeted.

Even Gonzales feels it’s a win still for her beau. “It was a win, win … So proud of DB, what a great run! On to the next,” she Tweeted, while professing her love publicly for Brown, 30, the son of a Jamaican father and a German mother.