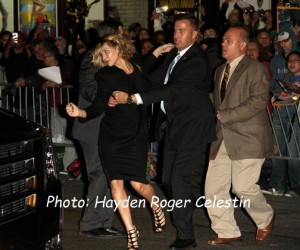 After her taping, she exited the Ed Sullivan Theater, and went over to her fans to sign autographs and posed for pictures with them. With about 200 fans screaming and pushing for their opportunity to get their autograph or picture with the ‘Hunger Games’ leading lady, it probably got to much for her as fans pushed through the barrier. Although her security detail tried to calm her, she got scared and tried to get back to her truck as quick as possible, to get out of their reach.

Rihanna And The Case Of Cultural Appropriation

The team that fought apartheid – The Southern Times