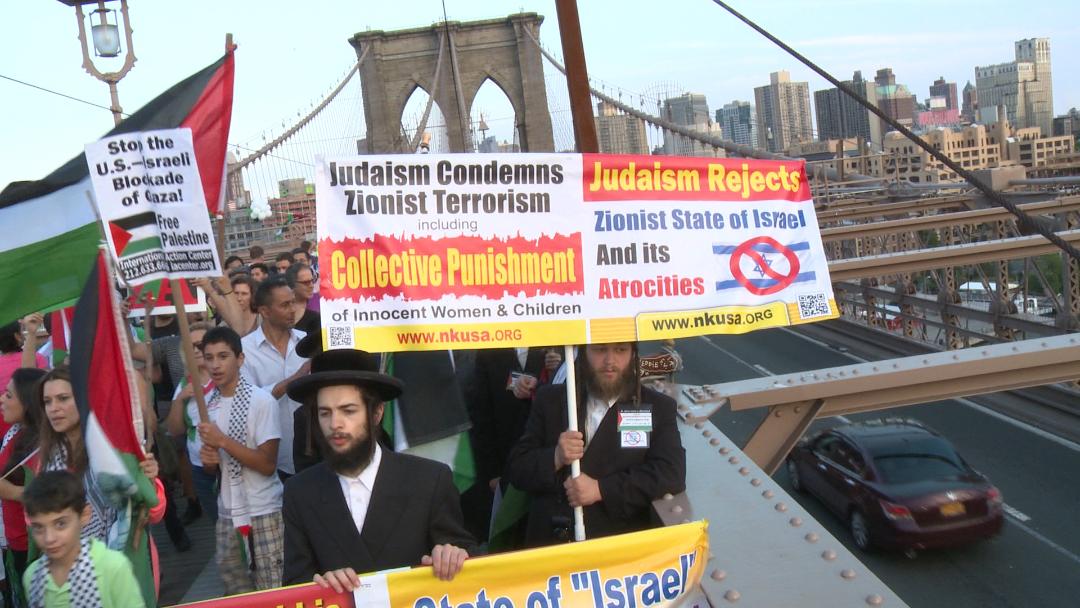 American Jewish filmmaker Heather Tenzer has been digging deep to tell the nuanced story about some of these anti-Zionist Orthodox Jewish military ‘refusers’ and their communities. Tenzer focuses her lens on Neturei Karta, a community of Jews who have long been speaking out in support of Palestinian liberation and against Israeli violence.

They are just one of many religious communities refusing to serve in Israel’s army and have been a consistent presence on the streets of New York, Washington DC, Jerusalem, and London. They paste the Palestinian flag on Jerusalem buildings and they increasingly face jail time for defying Israel’s military draft. They show up for most Palestine solidarity protests and over the years, have brought messages of solidarity to Palestinians – including the family of Palestinian teen Ahed Tamimi when Israel imprisoned her.

But their fight remains misunderstood. Not by other Palestine solidarity activists – or the general public but to other Jews and Israelis, who call them “traitors,” “crazy,” and “a cult.”

So what’s motivating these rabbis to stand up for justice? That’s the question which Philadelphia-based award-winning filmmaker and Stanford graduate Heather Tenzer explores in the documentary she’s directing titled, The Rabbis’ Intifada.

“Neturei Karta are called ‘traitors’ by Israel. And I can relate to it because I’m also called a traitor,” says Israeli historian Ilan Pappe (The Ethnic Cleansing of Palestine) in the film.

“The Rabbis’ Intifada has really challenged me to interrogate my own biases against Neturei Karta and ultra-Orthodox movements more broadly within Judaism,” says Jewish Voice for Peace deputy director, Rabbi Alissa Wise.

“We salute our Jewish brothers who have a different voice – all those who have been struggling side by side with the Palestinian people,” the Palestinian Shamstep band 47SOUL says about Neturei Karta on the film’s campaign page.

Tenzer, whose short films have screened on public television and in international film festivals, is currently running a crowdfunding campaign to raise funds towards the film’s completion. So far, the campaign has raised over $14,000 and is in need of 100 more small donors by tonight to qualify for a $5,000 donation.