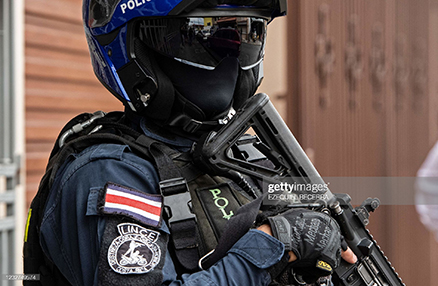 Some 40 properties and 40 vehicles linked to the group were seized in the raid, while 24 people were arrested, said Walter Espinoza, director of Costa Rica’s Judicial Investigation Organization (OIJ).

Espinoza, who spoke in a video statement, did not name the crime organization. He noted, however, that seizures in France and Spain of more than 5 tons of cocaine had been linked to the group.

Major cocaine busts in recent years have stoked fears that Costa Rica has become an important transit country for Colombian drugs heading toward Europe, worrying officials in one of Central America’s most stable nations.

Cocaine seizures jumped 56% in Costa Rica in 2020 from a year earlier, according to the Security Ministry.

Espinoza said the crime syndicate targeted on Tuesday had become very profitable by cutting out intermediaries and sending emissaries to Colombia to coordinate the purchase and transport of drugs bound for Europe.

“This group behaves like a true criminal organization that has a legal segment, an area for money laundering, another area for logistics activities and another area that obtains information from government officials,” Espinoza said.

He added that four members of his OIJ agency, including three who still work there, had been linked to the group and were feeding information to the crime syndicate.