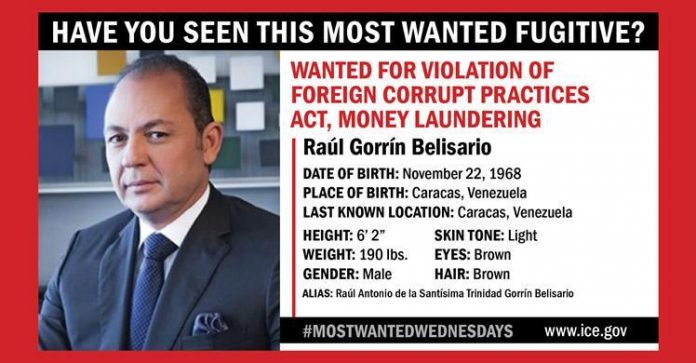 The action follows an indictment filed August 16, 2017, in the Southern District of Florida, Gorrin Belisario’s subsequent escape from justice, and the updated FinCEN advisory of May 3, 2019,regarding widespread public corruption in Venezuela.

The indictment alleges that Gorrin Belisario, 50, a Venezuelan citizen with a residence in Miami, Florida, paid millions of dollars in bribes to two high-level Venezuelan officials to secure the rights to conduct foreign currency exchange transactions at favorable rates for the Venezuelan government.

In addition to wiring money to bribe the officials, he allegedly purchased and paid expenses for them related to private jets, yachts, homes, champion horses, high-end watches, and a fashion line. To conceal the bribery payments, Gorrin Belisario made payments through multiple shell companies.

Furthermore, he allegedly partnered with other subjects to acquire Banco Peravia, a bank in the Dominican Republic, to launder bribes paid to Venezuelan officials and stash the illicit proceeds of the scheme.

ICE warns the public to not attempt apprehending the subject. If you have information about the whereabouts of this fugitive, immediately contact your local U.S. Immigration and Customs Enforcement (ICE) office or call the national hotline at 1-866-DHS-2-ICE as soon as possible.

Second Mexican journalist killed in Tijuana in less than a week