Dear Mr. President,
What if Adam Lanza was an immigrant?

Would we still be getting the deafening silence and delayed comments we have seen in the days since the Newtown, Connecticut massacre from the right wing and the many pro-gun lawmakers in the House, including John Barasso, Bob Corker, Ted Cruz, Joe Donnelly, Deb Fischer, Jeff Flake, Orrin Hatch, Heidi Heitkamp, Dean Heller, Jon Tester and Roger Wicker?

I can tell you with absolute certainty that we would not! In fact, by now, one week later, draconian legislation may have already passed the House and the Senate that would have made it so hard for legal immigrants, that they too would have had to join their undocumented brothers and sisters in a mass exodus from the U.S. – fearful for their lives and the constant police state that would have been instituted.
Representatives Hatch and Flake would be among those certain to lead the pack given their track record on immigration. These are lawmakers who say no to comprehensive immigration reform and support building a fence between the borders of the U.S. and Mexico to keep out the immigrants, guns and drugs. Not to mention the racist, outpouring from the anti-immigrant right wing that would have followed.

We saw the anti-immigrant moves heighten in 1996 when some lawmakers felt criminal aliens were causing a spike in crime in America and they needed to get rid of them. So under the Illegal Immigration Reform and Immigrant Responsibility Act of 1996, minor offenses such as shoplifting suddenly made legal immigrants too eligible for deportation. Worst, the IIRIRA was passed in 1996 but was applied retroactively to all those convicted of deportable offenses.

Then came 9/11 and black and brown immigrants are still living from the fall-out each time we walk through the airport and are pulled aside to be patted and swabbed, simply because we look like a “terrorist” and our names sound Muslim or foreign enough to fit the “profile.”
A spike in border violence last year led to the most racist immigration laws passed by states in the history of this country as lawmakers from Arizona to Alabama to Georgia tried their best to scapegoat immigrants and run them out of their state.

Never mind of course that the mass killers of infamy – from Columbine to Newtown- are inbred terrorists who are not black and brown immigrants but are Caucasian American born and raised in suburbia USA with easy access to guns and 99 percent unlikely to be racially profiled or stopped by police for suspicion of anything!

So as much as my heart breaks for the families of the many lost to gun violence by inbred terrorists, including those 26 at Sandy Hook, I continue to breathe a sigh of relief that Adam Lanza was not an immigrant!

At least now, we can push apace with the issue of comprehensive immigration reform in peace and look forward to a resolution that can benefit the millions of law abiding, non-gun owning immigrants, whose only wish is to live in the United States legally and build up not tear down America and fellow Americans. 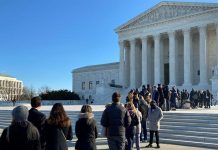