News Americas, LONDON, England, Mon. July 1, 2013: A sarcastically penned complaint letter on the poor service of regional Caribbean airline, LIAT, and the immigration service at airports across the region has been tweeted by non-other than Virgin Group founder, Sir Richard Branson.

Branson, the 2012 Invest Caribbean Now honoree, in a post to his more than 3 million Twitter followers, said that he was “tickled” to see another “brilliant note,” this time a complaint letter from a LIAT passenger named Arthur Hicks.

“How to write a complaint letter — read this hilarious note from a frustrated airline passenger,” tweeted Branson to his millions of followers before directing them to the entire letter on his blog.

Hicks, in the letter, said he and his fellow passengers were forced to endure multiple stops and delays on a recent flight to Tortola and the airline also lost their bags.

Additionally, Hicks talks about the fact that with LIAT’s six stops, he and his friend had to go through security scanners and also endure pat downs by security officials at each airport.

“Dear LIAT,
May I say how considerate it is of you to enable your passengers such an in-depth and thorough tour of the Caribbean.

Most other airlines I have traveled on would simply wish to take me from point A to B in rather a hurry. I was intrigued that we were allowed to stop at not a lowly one or two but a magnificent six airports yesterday. And who wants to fly on the same airplane the entire time? We got to change and refuel every step of the way!

I particularly enjoyed sampling the security scanners at each and every airport. I find it preposterous that people imagine them all to be the same. And as for being patted down by a variety of islanders, well, I feel as if I’ve been hugged by most of the Caribbean already. I also found it unique that this was all done on “island time,” because I do like to have time to absorb the atmosphere of the various departure lounges. As for our arrival, well, who wants to have to take a ferry at the end of all that flying anyway? I’m glad the boat was long gone by the time we arrived into Tortola last night — and that all those noisy bars and restaurants were closed.

So thank you, LIAT. I now truly understand why you are “The Caribbean Airline.”

P.S. Keep the bag. I never liked it anyway. 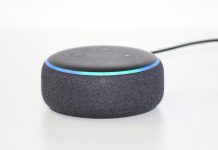 Simplify Your Life with Technology

No Divide And Rule Strategy In The Caribbean Says Pompeo

One of US FBI’s Most Wanted Nabbed in Mexico

Path to immigration reform could hinge on House races in Nevada – Las Vegas...