News Americas, MIAMI, FL, Tues. Oct. 6, 2015: Thirty-two people remain lost at sea as the US Coast Guard continues to search for any possible survivors of the 790-foot cargo vessel, El Faro that sank during Hurricane Joaquin.

On Monday, four days after the ship vanished, the U.S. Coast Guard said at a press conference that the ship sank in 15,000 feet of water north of the Crooked Island in the Bahamas.

The ship’s owner, TOTE Maritime, told family members a heavily damaged lifeboat and a partially submerged life raft were found and that the, “window to find survivors is closing.” Twenty eight Americans and five Polish crew members were on board.

One unidentified body in a survival suit was recovered by the Coast Guard and an intensive search continues for others.

“If they were able to abandon ship, they would have been abandoning ship in a Category 4 hurricane,” Coast Guard Capt. Mark Fedor said Monday. “Those are challenging conditions to survive in.”

Fedor said the National Transportation Safety Board and the Coast Guard will now launch an investigation into why the ship ventured toward the hurricane and how it sank.

The captain of El Faro, Michael Davidson, 53, of Windham, Maine, had planned to bypass Hurricane Joaquin as he sailed from Jacksonville toward Puerto Rico, but some kind of mechanical failure left the U.S. container ship with 33 people aboard helplessly and tragically adrift in the path of the powerful storm.

“I don’t know what the master was thinking, or what his company was telling him,” Fedor said about sailing a ship that was top heavy with 391 shipping containers on its deck into tropical weather that was forecast to develop into a major hurricane.

During their last transmission Thursday morning, the crew reported that the ship had lost power, had taken on water and was listing 15 degrees but that the situation was “manageable.”

Despite using Coast Guard cutters, helicopters, C-130 and a Navy P-8 aircraft from NAS Jacksonville, rescuers were unable reach the ship’s last known position until Sunday because of the fierce winds in excess of 100 mph and 40-foot waves. 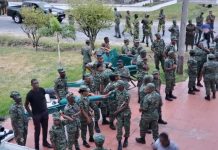 Will Immigration Reform Be Comprehensive and Inclusive? – Huffington Post (blog)