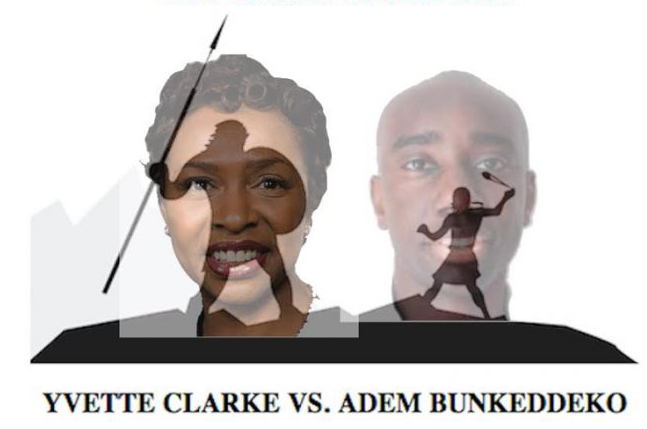 News Americas, NEW YORK, NY, Thurs. June 21, 2018: Several voters in New York’s 9th congressional district appear utterly ignorant of the date of the upcoming primary election, days after the incumbent and the challenger clashed in the first and only debate.

Speaking to several voters on Flatbush Avenue in Brooklyn recently, key parts of the Brooklyn district of long-time incumbent Caribbean-American Congresswoman, Yvette Clarke, WhatsUp TV says it found that many did not know the date of the June 26th Primary election.

Asked the date of the election, many voters said it was in November while others said it was October and even more stated plainly that they did not know, the show’s producer, Caribbean-born immigrant, Shaun Walsh, told NAN.

Those who did know the date did not know the candidates on the slate or their issues.

The show’s report comes ahead of the Tuesday election in which Clarke will face the 30-year-old son of Ugandan immigrants and first-time candidate Adem Bunkeddeko.

Bunkeddeko and the congresswoman debated each other on Monday night in a New York 1 debate moderated by Errol Louis.

Bunkeddeko, a community organizer, was dubbed as a “Johnny Come Lately” by Clarke at the debate but he snapped back that she “has to be held accountable for the record that she’s put out for over the last decade. And it’s been nothing.”

Clarke said he’s got the facts wrong. She pointed to a 2013 bill she helped pass that mistakenly placed many on the do-not-fly list, and amendments passed as part of larger legislation like the Affordable Care Act. She also touts her constituent services.

“That’s what separates me from someone who is recently moved to the community, and has nothing to show for it,” Clarke said.

Bunkeddeko, a Harvard Business School graduate has spent time working for political campaigns, a Bed-Stuy nonprofit, and served on the local community board.

“The work that I’ve been doing, we need that kind of work done in this community on a more grander scale,” Bunkeddeko said.

The New York Times editorial board last week agreed, endorsing him and writing, “Mr. Bunkeddeko’s résumé is impressive, and his biography is inspiring.”

The debate elicited many comments on New York 1 with one viewer attacking Clarke as the “Kim Jung Un of Brooklyn” while another posted: “Yvette and her mother took out Major Owens who represented the district just to create a Clarke political dynasty while Brooklynites suffer!”

Other viewers called her “rude” and yet another stated: “The challenger is impressive. The incumbent is the opposite.”

Clarke has outraised her challenger 3-1. The 9th congressional district cuts through central Brooklyn from Crown Heights all the way down to Sheepshead Bay.

Long Lines Mark Elections In A Pandemic In This CARICOM Nation

In Bolivia, Shattering the Glass Ceiling Can Cause Bodily Harm