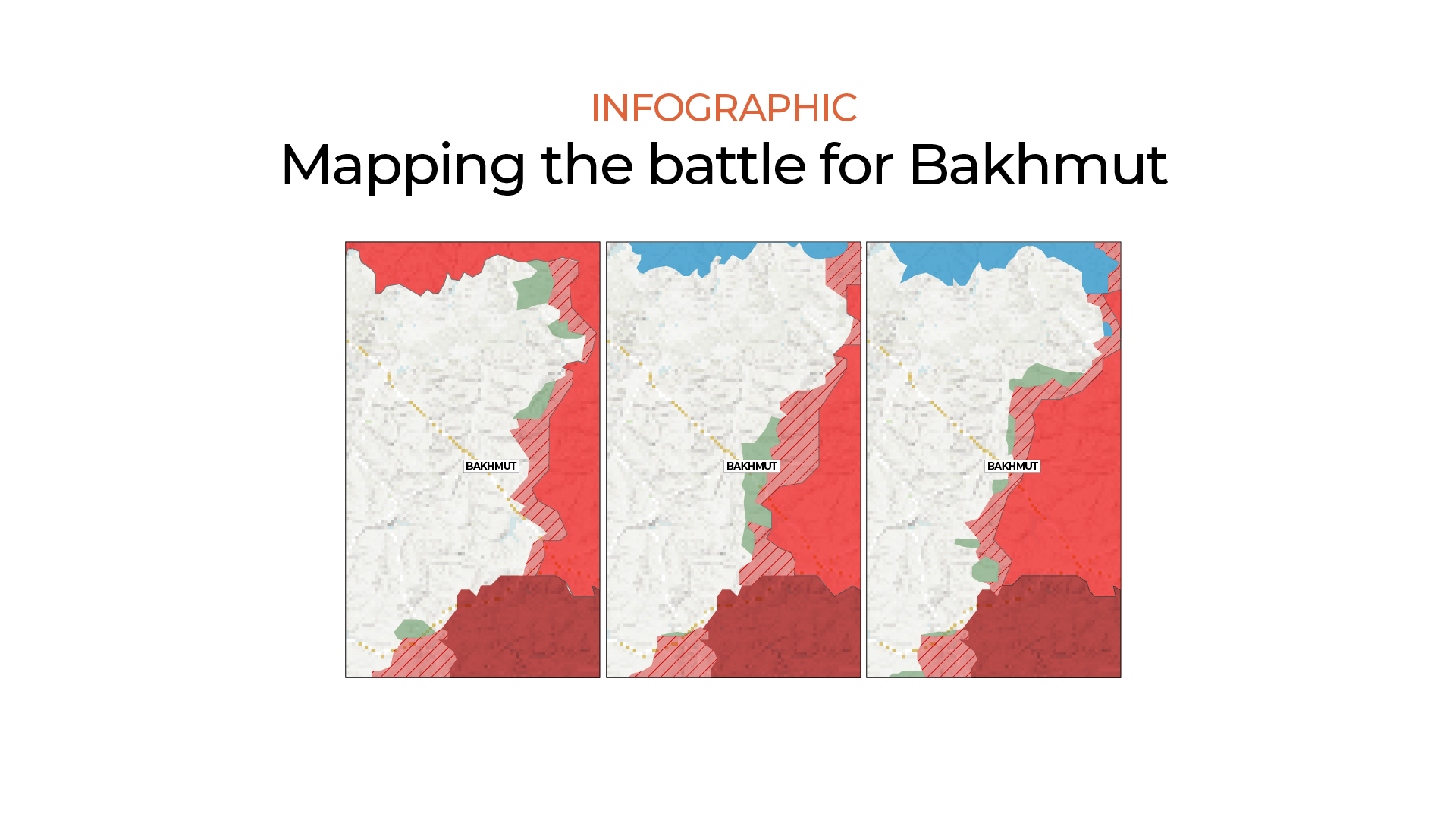 The front-line city of Bakhmut in eastern Ukraine has been the focus of intense fighting for months.

Battles became fiercer this week, but Ukraine’s forces appear to be holding out against the Russians, who recently claimed to have seized the nearby salt-mining town of Soledar – a victory Kyiv denies.

If Russian forces or the Wagner mercenaries who are also fighting in eastern Ukraine, or indeed both manage to capture Bakhmut, its fall would mark Moscow’s most significant victory after months of humiliating setbacks.

The city, famed for its wine-making, is symbolically relevant for Ukrainians for whom “Hold Bakhmut” is now a popular slogan.

Plumes of smoke rise from a Russian strike in the front-line city of Bakhmut in eastern Ukraine on January 7, 2023, during a 36-hour ceasefire over Orthodox Christmas declared by Russian President Vladimir Putin [Clodagh Kilcoyne/Reuters]

Bakhmut’s pre-war population was about 70,000. Today, an estimated 2,000 civilians remain in the city; many are surviving in squalid conditions as the conflict rages.

Al Jazeera’s Charles Stratford, reporting about a kilometre away from Bakhmut, said residents occasionally risk their lives to reach a volunteer centre in the heart of the city to get hot food and drinks.

“There has been no water supply in the city since October and no electricity since August,” he said.

After Russian forces captured the cities of Severodonetsk and Lysychansk in the Luhansk region in June and July, Moscow began a ruthless offensive on Bakhmut in the neighbouring Donetsk region.

It has used familiar tactics, advancing with destructive ground attacks on settlements south of the city.

In late July, Moscow made territorial gains around Bakhmut and Avdiivka, taking control of the Vuhlehirska Thermal Power Plant southeast of Bakhmut. Russia also seized Ukrainian barricades around the Butivka coal mine southwest of Avdiivka after Ukraine’s withdrawal from the area.

By August, Russian forces and mercenaries with the Wagner Group were pressing towards Bakhmut with increased air attacks and shelling. Wagner Group mercenaries also broke through Ukrainian defences on the eastern outskirts of Bakhmut.

By October, Russian troops were able to penetrate Bakhmut’s northeastern and southern suburbs, but they were ultimately forced out by Ukrainian counterattacks.

By November, as Bakhmut endured incessant barrages of Russian artillery, the battle had turned into trench warfare, and hundreds of people were reported dead and injured every day on both sides.

Kyiv said Russia was suffering heavy losses and that many of those killed belonged to the Wagner Group. Yevgeny Prigozhin, the Wagner chief, offered to pardon convicts if they joined the group and fought for six months. Since Prigozhin’s offer, some have been released.

As neither side made significant gains, civilians were forced to take shelter in basements prone to flooding.

By the end of November, Russian forces had advanced on Bakhmut’s southern front, capturing settlements such as Ozarianivka, a village 15km (9 miles) southwest of the city.

Even so, according to the Institute for the Study of War at the time, Russian advances were unlikely to generate “operational-level effects”.

On January 13, Moscow said its forces had seized control of the nearby Ukrainian salt-mining town of Soledar after weeks of intense battles.

The Russian Ministry of Defence said the capture was possible because of Moscow’s “constant bombardment of the enemy” using missiles, artillery and aircraft.

Kyiv denies Soledar has been captured and says Ukrainian troops are holding out.

The Russian ministry said control of Soledar would allow its forces to cut off Ukraine’s supply lines in Bakhmut and then “block and encircle the Ukrainian units there”.

Taking Bakhmut would also open up a route for Russian forces to press on towards Kramatorsk and Sloviansk, Ukrainian strongholds in the Donbas region, which Moscow hopes to take control of in its entirety.

Speaking to Al Jazeera in Bakhmut, a Ukrainian soldier who identified himself as Sergey, said Russian ground forces had launched massive attacks against Kyiv’s positions in recent months.

“They send their troops in like waves,” Sergey said. “We cannot stop them every time because we have fewer guys, and unfortunately, we have lost a lot of men.”

On his visit to the front line, Zelenskyy said Russia had also suffered many casualties: “The whole land near Soledar is covered with the corpses of the occupiers and scars from the strikes. This is what madness looks like.”

Described as one of the bloodiest campaigns of the war, the battle for Bakhmut continues.