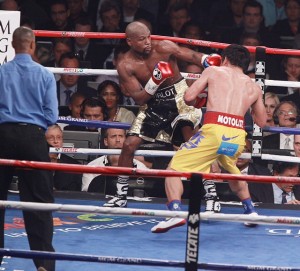 News Americas, LAS VEGAS, Nevada, Mon. May 4, 2015: Floyd Mayweather, Jr., took to Twitter to thank God as well as his family, staff, friends and worldwide fans after winning the highly promoted ‘fight of the century’ Saturday night in Vegas.

The tweet came after Mayweather was declared the winner over Manny Pacquiao by a unanimous decision in Las Vegas.

The Michigan Rapids born Mayweather walked away with a check for $100 million to ensure he stays in the history books as the richest fighter ever.

Mayweather now says he will fight one more time then hang up his gloves for good.

Pacquiao for his part also thanked his fans, many of whom were upset enough to boo Mayweather. “Thank you to all my fans for your support. I love you guys. God Bless,” he tweeted.

Tunneling through the Andes to speed global trade

This Caribbean Born Activist Wants To Be A Miami-Dade Commissioner