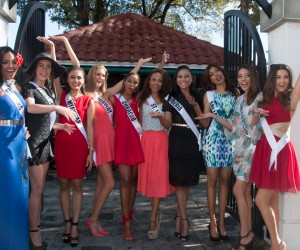 News Americas, NEW YORK, NY, Fri. Jan. 23, 2015: Several Caribbean beauties are among those vying for the title of Miss Universe as the 63rd Annual Pageant gets underway in Doral-Miami this weekend, January 25th, on NBC.

The Bahamas’ will be represented by one of its top models – 23-year-old Freeport native Tomacina Culmer who “is steadfast on creating a legacy that motivates people to not only follow their dreams but one that encourages self love and love for others.”

The British Virgin Islands will be represented by Jaynene Lewis, 25, who has training in aviation.

Miss Curacao Laurien Angelista believes that by striving to become her best self, it will allow her to live a more fulfilling life. She is currently finalizing her studies in Business Administration specializing in Marketing Management at the University of the Dutch Caribbean.

Kimberly Castillo, 26, is representing the Dominican Republic. She grew up in both the countryside and the city and is inspired by the growing fashion manufacturing industries in her country.

Guyana’s Niketa Barker is two years away from attaining her Degree in Medicine & Surgery (MBBS) from the University of Guyana. Not all about the books, this 24-year-old is also a philanthropist, a children’s advocate and a part time model.

Haiti’s Christie Desir, 25, left her Branded Content & Partnership career at Interscope Records to travel back to her native land and follow her dream. She started her own foundation which focuses on continuing education, providing hygiene products and bright futures for adolescent girls. Following in her father’s footsteps, her plan is to build hotels where individuals can connect with self, culture, nature and captivate meaningful life moments. She believes that her remarkable internship with Sean “Diddy” Combs and experience working in marketing will help her in rebuilding Haiti’s image.

Jamaica’s Kaci Fennell, 22, is the consummate beauty with style, grace and intelligence to match. She started modeling at nineteen years and now at twenty-two, she is following her dreams and competing internationally.

Puerto Rico this year is being represented by Gabriela Berrios, 24 from Toa Alta. She has lived in Puerto Rico and Orlando, Florida and studies business administration.

Turks & Caicos is being represented by Shanice Williams, 21, who was born and raised in Grand Turk and says she “has found a means of expressing herself through the art of pageantry.”