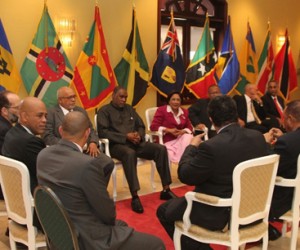 News Americas, LONDON, England, Tues. Jan. 7, 2014: The Caribbean is not short of ideas. Week after week, meetings take place; reports are published; regional initiatives are announced; speeches are made, columns written, and papers presented. From time to time, the region’s elder statesmen speak from experience, with passion and eloquence about the role and importance of Caribbean identity.

Despite this, the thoughts are not embraced, the words go unactioned, the concept of region as a unified entity diminishes, and the gulf between the dream and reality is widening.

The easy answer as to why, would be to say that this is a natural response to the challenge of the post 2007/8 downward spiral of most Caribbean economies. This has meant that for reasons of survival, most government’s near exclusive focus has been on national self-interest and survival; leaving any thought of a reinvigorated region to await global recovery.

However, this fails to explain why, for instance, when in 1992 the world and the Caribbean economy were relatively buoyant, the report of the West Indian Commission was not implemented. It does not address why no one acts on the incremental and practical recommendations coming out of pan-Caribbean meetings of the kind organized by Caribbean Export or the IMF in 2013 at which committed participants of all ages and disciplines made practical recommendations.

Nor does it take account of the new-found enthusiasm of nations in the region to make work sub-hemispheric agreements that undercut or overlap with partly or poorly executed CARICOM treaty arrangements.

That said, the global view is that as developing and advanced economies begin to experience higher levels of growth and international consumer confidence and disposable income improves, the fortunes of all, including those of the Caribbean region, will improve and that there will be a renewed emphasis on integration.

Unfortunately this may be wishful thinking. There is every sign that in 2014, as the world economy emerges from austerity and recession, the economic and political drivers of the past have changed, economic power is relocating, and the world is entering an age of inequity in which the social and political models inherited by the Caribbean from Europe are slowly being set aside to enhance competitiveness.

What is becoming apparent is that all western liberal democracies will now have to work much harder to maintain their prosperity and way of life. This suggests that to survive, the political class will be required to exhibit a much higher degree of leadership and honesty about the challenges that their nations are experiencing in relation to austerity, future competitiveness, and growth.

Put another way, accommodating low growth, indebtedness, increasingly volatile electorates, unemployment and a healthier but aging population, will require the gradual lowering of social expectations and placing a defined and well understood ceiling on such spending if nations are to achieve sustainable growth.

What this suggests in a Caribbean context is that for the foreseeable future the focus will be on national rather than regional solutions. It may also mean that electorates will have to accept that there are finite limits to what nations, even the most developed, will be able to provide to their citizens if they are to remain constantly competitive.

In a brutally frank answer to a question following a lecture he had given on education at the Cave Hill campus of the University of the West Indies, he said: “The tragedy of the times is that we are in the throes of a major crisis like the Caribbean has never ever experienced before, but we are refusing to face the reality that confronts us and all of us are engaged in one form or another of self denial.”

“What has happened is that we have created an elaborate systems of mendicancy at the highest levels of decision making, percolating right into the political system at the lowest level…., and if you want symptoms of what I’m talking about, these days you have to pay people to want to vote for you,” he said.

Unfortunately, almost every major development in 2013 suggested just this, making likely an inexorable drift away from any common positions or traditional notions of regionalism, at worst towards isolationism and xenophobia.

Where this will leave CARICOM is far from clear. Although its new Chairman, Ralph Gonsalves, the Prime Minister of St Vincent, intends during his period of tenure to change perceptions at a regional and international level by giving a strong public voice to issues from reparations, through to the Dominican Republic’s relations with Haiti and climate change, the reality is that at best these are difficult generic issues requiring long term resolution.

Separately at the New Year, CARICOM’s Secretary General, Irwin LaRocque, made clear that the body is developing a draft Five-Year Strategic Plan, that will set out a new common vision “shaped by new thinking and different approaches” which will identify priority areas of focus and intends, through the recently-established CARICOM Commission on the Economy, to explore avenues to put the region on a sustainable development path.

While this is welcome and long overdue, unless there is rapid measurable public progress on delivery, the year ahead looks likely to mark a further drift towards national solutions and is likely to challenge many of the assumptions most have grown up with in relation to the role of the state and state financed institutions.

Governments are unlikely to wait for the side show of regional consensus; they need to develop strategies that citizens understand, and encourage opposition parties and social partners to act more in the national interest. In the absence of any regional solution being developed in real time, they need above all to promote hope and a national collective will to succeed.

David Jessop is the director of the Caribbean Council and can be contacted at [email protected]. Previous columns can be found at www.caribbean-council.org.