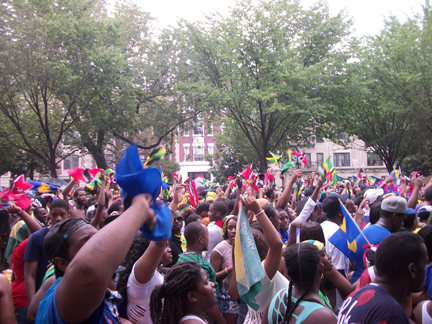 News Americas, NEW YORK, NY, Fri. Jan. 13, 2017: Caribbean nationals from five nations in the region make up the most foreign immigrants in New York City, ranking in the top 10. According to a new report from New York City Comptroller Scott Stringer this week, they are:

According to the report, nationals of the Spanish-speaking Caribbean nation of Dominican Republic make up the largest group of foreign-borns in NYC. They account for13.7 percent of the city’s 3.3 million foreign-born immigrants. That’s an estimated 453,176 people!

With an estimated 185,681, Jamaican immigrants are the third largest foreign born group in New York City, accounting for 5.6 percent of the total 3.3 million foreign-born immigrants.

Guyanese nationals are the third largest number of foreign-born Caribbean immigrants in the city but only the fifth largest overall. They account for just 4.2 percent of the total foreign born population or an estimated 140,340 people.

Coming in at fourth on the list of most Caribbean nationals in the city of New York is Haiti. However, overall, Haitians are only the 7th largest foreign born immigrant group in the city, accounting for a reported 2.8 percent with 91,595 nationals.

Rounding out the list of most Caribbean nationals in the city of New York is Trinidad & Tobago. Overall, Trinidad & Tobago nationals accounted for the ninth largest foreign born group of immigrants in the Big Apple. They are estimated to be just 2.7 percent of all foreign-born immigrants with just 89,302 nationals.

The Stringer report, titled: “Our Immigrant Population Helps Power NYC Economy,” used American Community Survey data from the US Census to come up with the totals. It was released ahead of Donald Trump’s inauguration to show the scale of contributions that immigrants make to every industry in New York City, including technology, finance, entertainment and medicine. Immigrants from more than 150 countries make up 46 percent of New York City’s employed population and almost 40 percent of the City’s total population.

“We have not just a moral imperative to be true to our values and stand up to anti-immigrant policies, but an economic imperative as well. The contributions that immigrants make to our economy are enormous,” Comptroller Scott M. Stringer said this week. “Religious bans, threats of mass deportations, registries—all are antithetical to our legacy as New Yorkers and Americans. We hope this data shows the extraordinary impact immigrants make in our City, and we hope it demonstrates why supporting New Yorkers, no matter where they’re from, is the right thing to do for our economy.”