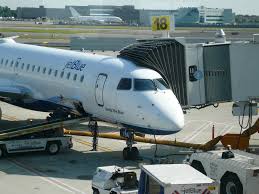 News Americas, NEW YORK, NY, Mon. Jan. 19, 2015: Caribbean Airlines last night said it is investigating claims of a near collision with one of its aircraft and a Jet Blue plane bound for Texas, Saturday night at J.F.K. Airport in Queens, New York.

“Caribbean Airlines through our sustained efforts is committed to the safety and security of all passengers. We are concerned to hear of an alleged incident highlighted on internet news sites regarding JetBlue 1295, and BW flight 526 on Saturday night (17th January) at JFK airport, New York,” CAL said in a statement posted to its site last night.

The statement comes following news reports in NYC, including by WABC TV that JetBlue flight 1295 on its way to Austin, Texas was forced to screech to a stop after Caribbean Airlines Flight 526 emerged  right in its path.

JetBlue spokesman Rick Clark said Flight 1295 to Austin, Texas, was cleared for takeoff on Saturday evening and rolling down the tarmac at full speed when the pilot was forced to put on the brakes to abort what could have been a deadly disaster and return to the gate. The flight took off for Austin three hours late.

WABC reports that radio transmissions between the tower and both planes show the tower contacted the Caribbean Airline pilot at least twice but there was no answer.

JetBlue says that Caribbean Airlines was not authorized to cross the runway at the time and is unsure how the two aircrafts got so close to each other.

Caribbean Airlines said last night it is “in the process of investigating and compiling the facts surrounding this allegation in cooperation with all Regulatory agencies.”

No one was hurt in the incident.

New US Embassy For The Dominican Republic