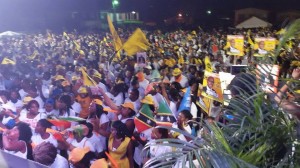 News Americas, CHARLESTOWN, Nevis, Tues. Feb. 17, 2015: The opposition coalition, Team Unity, in St. Kitts/Nevis has claimed victory in Monday’s elections even though the country’s Supervisor of Elections of the Electoral Commission, Wingrove George, refused to announce the final results of the election at 5 a.m. this morning.

The country’s supervisor of elections told media personnel earlier this morning that there will be no more public results released and it could be “days” before the results were made official because there were reports of discrepancies in the elections where less than 16,000 votes were cast.

Sources told NAN exclusively this morning that from a voter tally witnessed by their agents, that the opposition coalition, Team Unity, had won enough seats to take the reins of power from the 20-year ruling St. Kitts Labor Party led by Prime Minister Dr. Denzil Douglas.

The three parties said they came together to save the country from the “brink of dictatorship,’ which they say is occurring under the current administration of Dr. Douglas.

The election results so far show that Nevis Premier Vance Armory of the CCM easily retained his seat in the federal parliament for Constituency 10 over new-comer Nevis Reformation Party (NRP) candidate, Cory Tyson, by 754 votes to 306, respectively.

With six boxes still out in Constituency number 9, also in Nevis, Mark ‘The Sherrif’ Brantley, the island’s deputy premier and also of the CCM, looked set to retain his seat, as he led NRP’s candidate and former Housing Minister, Robelto Hector, 763-673.

While Patrice Nisbett of the NRP and a senator in the St. Kitts Labor Party government of Denzil Douglas, looked set to retain his seat over the CCM’s minister of housing and agriculture, Alexis Jeffers, who had waged a battle throughout the election to unseat Nisbett. Still four boxes were still unreported in a Jeffer’s stronghold of St. James. Nisbett had been accused of doing nothing to help bring funding to Nevis and its people.

The election also was too close to call in Constituency number 1 with Ian ‘Patches’ Liburd lagging 57 votes behind SKLP’s Asim Martin with four boxes still unreported while PAM’s Lindsay Grant was behind by 24 votes in Constituency #4 with two boxes still not reported.

But unofficial reports indicate both Grant and Liburd had won their seats by 26 and 4, respectively.

Not a single vote was released in Constituency #5 where PAM leader Shawn Richards had faced off against SKLP’s Norgen Wilson. But sources tell NAN Richards was the winner by 334 votes.

While Dr. Douglas looked set to retain his parliamentary seat with 1,126 votes over PAM’s newcomer and pastor, Vernon Connor’s 75.

As the released results looked like a horse race early this morning and many pulled an all-nighter waiting on an announcement, angry voters flooded VON radio station on Nevis, to express disgust that no official results were available hours after the election.

They said their rights were being “trampled upon” and called it “unacceptable” and “a shame.”

“What this supervisor of elections has done is almost treasonous as the numbers are there and the winner is known. His silence does not silence the election results,” said Premier of Nevis and head of The Concerned Citizens Movement (CCM), Vance W. Armory on Von Radio. “It shows we in St. Kitts/Nevis have gone to the lowest level of depravity. The supervisor of elections must be called on to do his job and report the results of the people’s votes.”

Brantley calling in on VON Radio said that the move by the commission was “unprecedented” but urged people to remain calm while standing up for what is right.

Reports of electoral list errors and voter disenfranchisement in Monday’s election in St. Kitts/Nevis were widespread even as claims of polling stations staying open way beyond the 6 p.m. closing time to allow overseas voters being brought in by the ruling party and the NRP in Nevis on chartered flights to vote, surfaced.

Kittians and Nevisians flown in on chartered jets from the U.S., Canada and across the Caribbean by all sides to increase the voter tally at the ballot boxes.

The lead up to the election had been fraught with legal battles over a hastily pushed through electoral boundaries change by the government that was subsequently overturned by the UK Privy Council.

Callers urged the country’s governor general to take charge and not allow the Federation of St. Kitts Nevis to spiral into chaos.

US Secretary Of State Touches Down In Suriname, Guyana

With Pope in Town, Ribald Rio a Land of Outdoor Confessionals