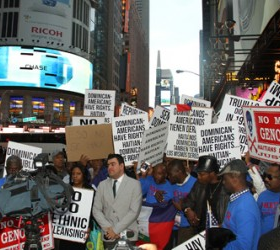 News Americas, WASHINGTON, D.C., Fri. July 10, 2015: The Organization of American States (OAS) has sent a mission to the Dominican Republic and Haiti to gather information on the situation of Haitian migrants in the field.

The mission is headed by the OAS Secretary for Political Affairs, Mexican Francisco Guerrero and will end its activities in Haiti on July 14.

The group will prepare a report for the Secretary General of the hemispheric institution, Luis Almagro.

During its visit to both countries, the mission will meet with government officials, specialized agencies in charge of migrants’ registration, as well as migrants themselves and other actors involved in the process.

The visit comes as the members of two of Boston’s largest immigrant communities faced off peacefully at Park Plaza Thursday afternoon.

Some 140 Haitian-Americans and their supporters marched from City Hall to protest the Dominican Republic’s plans to deport tens of thousands of Haitians born in the Dominican after 1929, but stripped of their citizenship by the country’s high court two years ago.