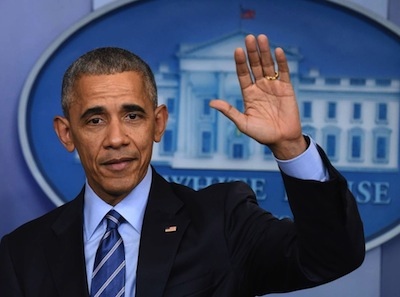 Thank God the FAILED Obama Presidency is over.

And Barack Obama’s own “farewell” speech in Chicago this week proves what a LOSER he is if leadership has any meaning.

Most of the speech is the mindless numbing nonsense speech writers are paid to write that carefully chosen audiences lap up – but yes there are some “nuggets” in it worth exploring in this FINAL episode of Obama’s America.

First, take a look at the photo above. It “perfectly” reflects the real Obama. A man who looks older than his physical age and fading away!

Now to this farewell speech … President Obama in a very short part of his windy discourse tells us about all his so called “achievements.”

“If I had told you eight years ago that America would reverse a great recession, reboot our auto industry, and unleash the longest stretch of job creation in our history…if I had told you that we would open up a new chapter with the Cuban people, shut down Iran’s nuclear weapons program without firing a shot, and take out the mastermind of 9/11…if I had told you that we would win marriage equality, and secure the right to health insurance for another 20 million of our fellow citizens – you might have said our sights were set a little too high.”

4) Open up a new chapter with Cuba

Then Obama delivers his PUNCH line ……

“You might have said our sights were set a little too high.”

ENCORE … “You might have said our sights were set a little too high.”

What an insult to everyone for Obama to claim he set his sights high.

Back to Barack’s list of his 8 “great” achievements … call it ‘Pulp Fiction.’

1-3 are the same thing – the aftermath of the big recession. The clear implication of Obama’s claim here is that if not for him being President, if someone else had been elected President, the country would have been destroyed because only Barack Obama knew how to end this recession.

IF you believe that label, you are a Fool. Any President ANY President would have done exactly the same. Throw hundreds of BILLIONS of FREE dollars at the financial industry that screwed us to rescue them.

That is ALL Obama did. And having done so by definition the economy recovered.

That is NOT leadership – it is standard operating procedure for any President. In other words he restored the same Status Quo that caused the problem and then during his 8 years, the 1% have become richer than they ever were …

Give Obama #4 as I did previously for his Cuba policy with this caveat – he waited 7 years to do what he should have done much, much sooner.

As for #4 – Iran and its nuclear program – the only two nations against that deal were Saudi Arabia and Israel. Every other nation favored it.

What Obama did not have the courage leadership to do is develop  a constructive relationship with Iran, continuing the mindless hard line NOT in America’s best interest in the Middle East.

On to # 6 – killing bin Laden. It is clear from the facts the Navy Seals were under orders to kill him no matter what. He was surrendering, but the murdered him anyway, because that is what Obama decided was best for him and his re-election campaign. We could have gained far more by keeping him alive and interrogating him and gaining priceless information, and yes even possibly getting him to renounce his mass murdering and terrorism and undermining his importance to all the other terrorist groups as a ‘hero.”

Number 7 is ridiculous. Obama is taking credit for marriage equality.

Obamacare is Obama’s WORST FAILURE. He gave us a convoluted law and forcing Americans to buy an overpriced inferior product called private health insurance with ever rising premiums and ridiculously high deductibles and no public option while doing NOTHING for 8 years to reform in any significant way the out of control medical industry.

It is HUGE in a horrible way ….

President Obama played an essential role in ELECTING DONALD TRUMP and making it even worse, giving us a Republican controlled Congress.

And now making it worse still as impossible as that should be, Obama is making Trump look good by this vicious phony campaign to de-legitimize Trump with the outrageous politicizing of the CIA and the other so called “intelligence” agencies – with the goal of destroying Trump.

Back to the Obama Farewell speech …

So after he finishes with his litany of non-achievements Obama says this: “But that’s what we did.  That’s what you did.  You were the change.  You answered people’s hopes, and because of you, by almost every measure, America is a better, stronger place than it was when we started.”

The point is Obama did NOT answer people’s hopes. He failed us.

America is NOT a better stronger place than when he started. Again, all he is doing is taking credit for “ending” the recession and using it to bamboozle us with a larger message about him creating a  better America. He is being truthful in one regard the 1% are better off after 8yaers of Barack Obama.

Again … “and maybe you still can’t believe we pulled this whole thing off.”

That is the height of IRONY. You are right Barack Obama, you pulled off one of the greatest CONS in the entire history of the Presidency.

And that has been the reason for the existence of Obama’s America and 311 consecutive weekly episodes to expose the reality of the Obama Presidency. Not from the perspective of the bigoted hateful Republican Right, but where it matters – from a progressive perspective. It is not about Obama doing too much as the Right accuses him, but doing far, far too little and NOT what he promised us in 2008 – REAL CHANGE.

All we got was more of the same as Obama proves himself with his own list of so called achievements. They amount to nothing much or worse, and then Obama went out of his way to give us Hillary Clinton in 2016, which is the ONLY reason Donald Trump will become President next week.

So it is time to sum up what was the purpose and what I did in and with Obama’s America. I satirized the Obama Presidency as Obama so “richly” deserved. What President Obama did was serve the Status Quo just like Presidents before him and that is what I condemn him for and so should you.

We needed a Change Master as President. He made us believe he would be and then he FAILED us miserably while claiming he brought real change. That absolutely merits him being called a Master CON Artist by me as I have done repeatedly. I have used some rough language in these 311 weeks to be theatrical and effective. It was and is satire. President Obama as a BAD actor on a very big stage and I treated him accordingly.

I have no personal animosity toward him. If he had not become President I would have had no reason to write about him. My disdain for him as President was heightened even further by the fact I became an avid supporter when I first heard him speaking in New York City as an obscure candidate in 2004 for U.S. Senate and his unique potential was so, so obvious to me.

All it ultimately produced was a FAILED Presidency and Donald Trump.

Goodbye Barack and Michelle. I will NOT miss you. Good riddance.

Next week the FIRST episode of Trump’s America. Get ready!