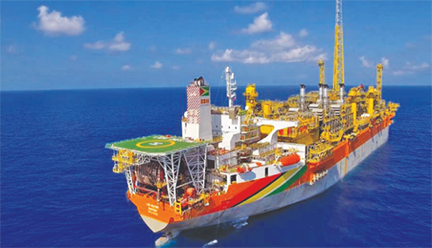 News Americas, NEW YORK, NY, Fri. Dec. 3, 2021: Over the weekend, the Guyana government released an article stating that the Stabroek Oil Block is not up for renegotiation. It cited a number of reasons for its position including the sanctity of contract, the stability clause and because Exxon lost US$22 billion last year.

The article reads like a marketing campaign for why Guyana should approve the Yellowtail project given the risks faced by Exxon and its partners. There are some serious flaws in the government’s arguments which raises the question about whether the government is acting on behalf of the oil companies instead of the people of Guyana.

The American government has renegotiated many agreements or cancelled agreements. In the last few years, America reneged on its Paris climate commitment and abandoned the nuclear agreement with Iran. Calling the North American Free Trade (NAFTA) agreement signed since 1994, “the worst trade deal in the history of the country”, the Americans scrapped its deal with Canada and Mexico and forced those countries to sign a new agreement in 2020.

Given the lack of ring fencing, our take from the Stabroek Block will likely hover around the nominal 14.5% of revenues for many years to come. Contrast this with a survey, conducted several years ago, that showed the revenue share from 67 oil regimes around the world being between 65% and 85%. We may very well have one of the worst oil deals in the history of the world, but our government parrots the “sanctity of contract” line instead of seeking a fair deal for the Guyanese people.

Why was Exxon allowed to flare for months at Liza 1 breaching the agreement signed? To date, we are not aware that Exxon was fined for all this flaring. Does the government only believe in “sanctity of contract” when it favours the oil companies and not the Guyanese people?

The government cites the “stability clause” as a reason why the Stabroek contract cannot be reviewed or re-negotiated. Does the Minister of Natural Resources have the power to sign an agreement that binds the hands of future governments for decades? That doesn’t seem to make sense. And, what about the constitutional issue involved – Can a so-called stability clause on the oil contract negate and nullify the sovereignty of Guyana’s parliament?

The validity of the stability clause has been seriously questioned by Chris Ram during a presentation in 2019, see minute 18 of the video here

Instead of being concerned that a major oil spill can bankrupt Guyana, the government is concerned about the supposedly US$22 billion Exxon loss due to the pandemic that hit in March 2020. However, the government didn’t state that Exxon paid out US$14.9 billion in dividends to its shareholders in 2020. Why this anomaly for a company that supposedly lost US$22 billion in 2020? This quirk can be explained by temporary actions required by accounting rules. In 2020, Exxon was forced to mark down about US$19.3 billion in natural gas reserves because the price of natural gas fell in 2020. But recently natural gas prices have been hitting multiyear records – substantially reversing the temporary markdown. Hence, the US$22 billion lost was not a cash lost (it is called a paper loss); that explains why Exxon could still justify paying out US$14.9 billion to its shareholders. If Exxon had a US$22 billion cash loss, then its shareholders would have fired management for leveraging the company too much by paying out US$14.9 billion in cash dividends. The Government of Guyana is too busy defending a bad deal than to spend time to consider these facts.

In February 2020, President Irfaan Ali said all oil contracts are on the table for review and renegotiation. You can find a snippet and a full interview here. With the release of the article on the government website, the government appears to have forgotten its promise to the people of Guyana.

The Stabroek agreement has a clause where it allows government to reach out to Exxon to change the agreement. Has the government reached out to Exxon with regard to the unfair terms in the contract?

The government seems to be in a rush to approve Yellowtail. We should question why the rush? The US$534 million it has derived from oil still sits untouched while the virus ravages its citizens and floods destroy farmers’ crops. It has not even answered the many questions posed during the EPA session on the gas-to-shore project, but it rushed to have EPA sessions for Yellowtail. Many questions raised to the EPA about Yellowtail remain unanswered. The government has not yet released the US$460 million pre-contract audit and has failed in its duty to audit US$9.5 billion for Liza 1 and Liza 2.

It appears the Guyana government is overwhelmed by the number of oil-related activities it is engaged in. If you find yourself in a hole, the first thing to do is to stop digging. The oil companies will exploit this disorganized approach by the government for the benefit of their shareholders.