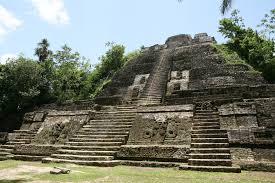 It’s the ruins of the Mayan Jaguar Temple in Belize which was originally built in the sixth century.

It is named for its boxy jaguar decoration and rises in 9 tiers to about 65 ft.  above ground. In the north side is a wide basal stairway and on the lower level is a mask of a jaguar with a protruding nose.  It was unearthed along with the Mask Temple and the High Temple in 1974.

Archaeologists believe the Mayan site where the Temple is located was of moderate size as early as 1500 BC. However, some of its later structures were occupied as recently as the 18th century AD, signifying over 3200 years of occupation. Lamanai site is one of the oldest continuously occupied Maya sites in Belize, from about 1500 BC when maize was being grown at the site, to 1680 AD.  It is located on 950 ares  and  is one of the largest Maya ceremonial sites in Belize. Access to the Lamanai ruins is by boat up the New River from Orange Walk District in northern Belize. There is also the option to stay at the Lamanai Outpost Lodge, which is just a 3-minute boat ride from the ruins.

13 Words You Must Learn Before Visiting New York – Huffington Post

Trump Delivers For Some Venezuelans