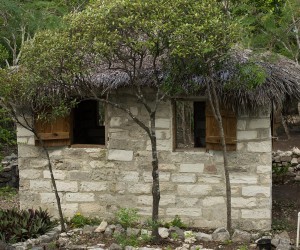 It is a slave cabin on the historic Cheshire Hall plantation in the Turks & Caicos Islands.

Cheshire Hall, the 200 year-old ruins of this former cotton plantation is one of the key historic attractions on Providenciales, TCI.

Thomas Stubbs left England and moved to Providenciales in the early 19th century, where he named his plantation Cheshire Hall after his home county. By 1810, Thomas had given up and sold the hall to his brother Wade. A cornerstone at the ruins is inscribed “W. Stubbs 1810” to mark the transaction. The plantations survived for about 30 years before soil exhaustion, drought and the hurricane in 1812 destroyed them. Before he died in Grand Turk in 1822, Stubbs’ plantation included thousands of acres and 384 slaves. On the night of September 9, 1800, 14 slaves escaped in a small boat. He offered a reward of US$500 for their return, but there is no record indicating if they were ever found.

The building ruins have been carefully preserved by the National Trust and offer spectacular views of the island.