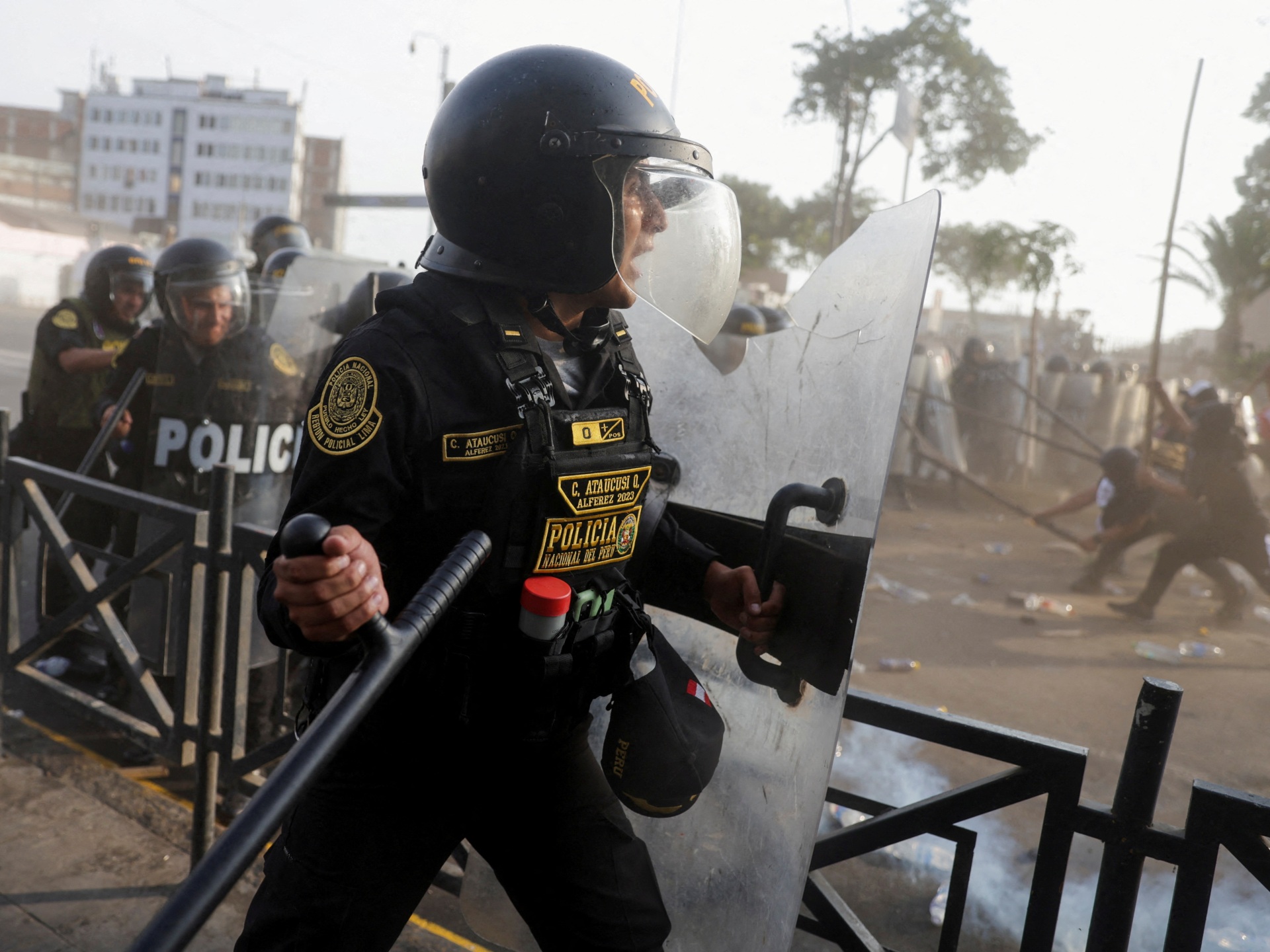 Firefighters have been working to put out a raging inferno that broke out in a building near a protest site in Peru’s capital Lima where police fired tear gas as thousands of protesters poured into the city to demand the removal of President Dina Boluarte.

Demonstrators gathered on Thursday in Lima’s historic downtown area where scuffles broke out with the security forces who battled to stop the protesters from reaching key government buildings, including Congress, as well as business and residential districts of the capital.

A relationship between the fire which raged late into Thursday night and the demonstrations was not immediately clear. Images showed people rushing to get their belongings out of the building that was close to several government offices. The National Police of Peru shared dramatic footage of the fire on social media and called on people to stay away from the area.

For much of the day on Thursday, the protesters played a cat-and-mouse game with police, some of whom threw rocks as they tried to get through police lines while officers responded with volleys of tear gas that sent protesters fleeing.

Police estimated that about 3,500 people participated in the protests, but others claimed the figure was double that estimate.

Al Jazeera’s Mariana Sanchez, reporting from Lima, said many people protested peacefully but some clashed with police during the demonstration that participants said was to “take Lima”.

“This is the march of the taking of Lima, and that’s exactly what President Dina Boluarte said: They could come to take Lima but peacefully and that she would be waiting for them at the presidential palace,” Sanchez said.

The protesters were angry as they “want justice” for the nearly 50 people killed in the protests so far and have committed to continue their demonstrations until Boluarte resigns.

The mounting death toll from the protests, which broke out last month, now stands at 45, according to the government ombudsman. Another nine deaths have been attributed to accidents related to the demonstrations, which were sparked by the December 7 removal of Peru’s left-wing former President Pedro Castillo after he tried to illegally shutter Congress and consolidate power.

By bringing the protests to Lima, demonstrators hope to add weight to the movement that began when Boluarte was sworn in to replace Castillo.

Though the protesters are demanding that she step down, Boluarte was defiant on Thursday night in a televised speech alongside key government officials in which she thanked police for controlling the “violent protests” and promised to prosecute those responsible.

The president also criticised the protests for “not having any kind of social agenda that the country needs”, and accused them of “wanting to break the rule of law” and raised questions about their financing.

Police block demonstrators from getting closer to the airport in Arequipa, Peru, on January 19, 2023 [Oswald Charca/Reuters]

A total of 22 police officers and 16 civilians were injured on Thursday throughout the country, Interior Minister Vicente Romero Fern?ndez said.

A video posted on social media showed demonstrators trying to storm the airport in southern Arequipa, Peru’s second city. They were blocked by police and one person was killed in the ensuing clashes, Peru’s ombudsman said.

That was one of the three airports that suffered attacks from protesters on Thursday, Boluarte said, adding it was not “a mere coincidence” they were stormed on the same day.

The weeks of nationwide protests have marked the worst political violence in more than two decades and highlighted the deep divisions between the urban elite largely concentrated in Lima and the poor rural areas.

Last week, Boluarte’s government extended a state of emergency in Lima and the southern regions of Puno and Cusco, curtailing some civil rights.

Boluarte maintains the situation in the country is “under control” and has called for dialogue, but she has also dismissed calls to resign.

Human rights groups have accused the police and army of using deadly firearms in the protests. The police accuse the protesters of using weapons and homemade explosives.