It’s a big shock to the system of right wing America, already reeling from the fact that the good old USA is now becoming increasingly brown and black. Now Pew has given them real numbers and it’s frightening.

So what exactly are these “sobering” facts?

1: The new report claims that by 2065, new legal immigrants and their descendants will drive most U.S. population growth, as they have for the past half-century.

4:  This means there will be no racial or ethnic majority group. None! This will change the face of the electorate, raising the education levels among the foreign-born population and altering the nation’s birth patterns. The projections are based on assumptions about birth, death and immigration rates that are built on recent trends, but those trends can change.

5: Asians will rise as the nation’s largest immigrant group. Among immigrants who arrived within the past five years, Asians already outnumber Hispanics, in part because of a sharp recent drop in immigration from Mexico. This slowed Hispanic immigration also will have a longer-term impact: In 2065, Pew says Asians will outnumber Hispanics among all immigrants – 38% to 31%. Today those shares are 26% and 47%.

And this is based on a projected slowed down immigration rates between 2055and 2065, which is set to rise by only 9%, compared with 17% from 2005 to 2015. Immigrant arrivals from Central and South America has sharply declined from 2000 to 2013, while the number of immigrants from Asia has been on the rise.

So how will building a wall between Mexico and the USA help? Don’t think so Donald and company!

Deport them back to Asia? Not going to work as this is based on legal immigration projections not illegal and the economy needs them.

Especially since U.S. Census Bureau data shows that 41% of immigrants arriving here in the past five years had completed at least a bachelor’s degree.

The fact is that immigrants are here to stay and they are on the rise so the GOP’s right wingers had better wake up and face reality, embrace diversity and immigrants or face extinction. 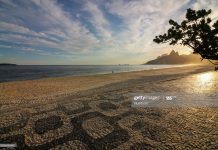 Hurdles Ahead for Beckham and MLS in Miami – New York Times

Caramel and Cream at Emporio Armani