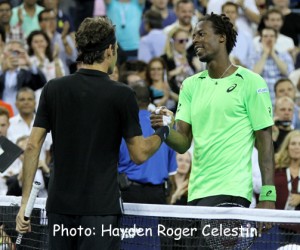 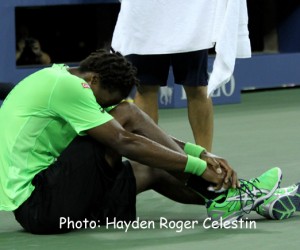 Gaël Sébastien Monfils after losing the quarter finals of the US Open on Sept. 4, 2014.

For two sets on Thursday night, Monfils silenced the fans of No. 2 seed Roger Federer who had gathered at the Arthur Ashe Stadium for the men-s quarter-finals showdown. Monfils played like a champion even though he has no coach at the moment, no one could tell. He mixed things up with soft slices, drop shots and sudden power stunning Federer who didn’t appear to have a game plan to deal with either Monfils or the windy conditions inside Ashe.

His was a spirited and focused set as he held back the Swiss-born Federer 4-6, 3-6.

But then Federer sprang back to ‘life’ and try as he might, Monfils was unable to come back as the Swiss finished 6-4, 7-5, 6-2, to reach the semifinals of the US Open for the ninth time.

Still there’s little doubt that it’s the last we will see of this talented French player, who raw, entertaining gifts are made for the primetime lights of New York.

Monfils for his part Friday tweeted a picture of Arthur Ashe stating: “Thx @usopen I will keep working harder to maybe have one day my picture next to my idol. A big thx to all my fans.”

Monfils father, Rufin Monfils is a former soccer player from the island of Guadeloupe and his mother, Sylvette, comes from the nearby island of Martinique.

Among celebrities at the match were Hugh Jackman and his wife as well as singer Gwen Stefani.

Is the World Cup All That Argentina Is Looking Forward To? – Motley Fool