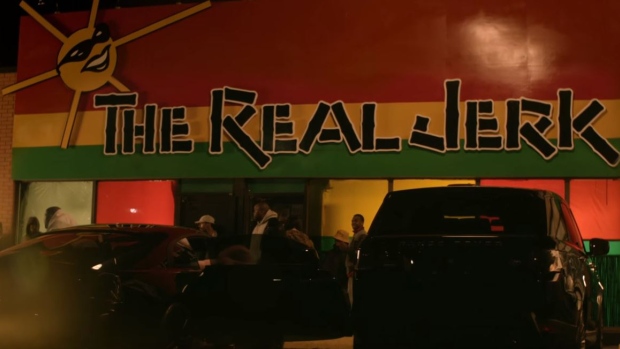 News Americas, TORONTO, Canada, Tues. Feb. 23, 2016: Rihanna is putting the spotlight on dancehall and the cool vibes of Jamaica even though she is confusing some of her main stream music fans and even music editors with her adaptation of Jamaican slang and patois in the lyrics. But the Bajan-born queen is keeping her new song “Work” authentically Caribbean, even putting the spotlight on a popular Toronto Jerk bar/restaurant in her just released video.

The Real Jerk Restaurant has been a landmark restaurant on Gerrard Street East in Toronto and has shot to fame in Ri Ri’s dancehall infused new song “Work” featuring Canada born rapper Drake. The restaurant’s name is front and center in the opening of the video which was shot inside with Toronto dancers who turned the joint into a dancehall party scene straight out of Jamaica.

Real Jerk is owned by Ed and Lily Pottinger who were born in Jamaica. They also have a book released by the same name. The couple started the restaurant at a time when Torontonians weren’t familiar with “jerk”. They thought it was a Steve Martin movie… so they gave out food to people passing by and it caught on.

The restaurant is transformed for the video and instead looks more like a Jamaican dance hall, complete with dancers simulating sex.

Even Rihanna bared her nipples completely in the video as Drake, looking like a complete misfit, tries his best to fit in. Of course he eventually gets into the swing of things as Rihanna “works it,” as the two end the video sharing a kiss.

However, there is no denying that Rihanna’s first Barrington Levy concert had influenced the song and video.

Two Dozen Medal Haul For The Caribbean At Tokyo 2020

Dialogue Not Ideology Required To Address The Crisis In Venezuela