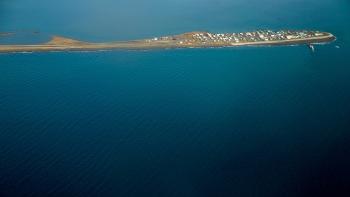 Professor Volkmar Mueller’s formula shows that sea level has actually dropped over twenty thousand feet since the dawn of recorded history. The evidence he says is irrefutable.

What does this mean? The professor says that this finding poses serious questions in history and Geology. He points out that his formula confirms the theory of Isostatic Rebound and possibly paves the way for the acceptance of Earth Expansion as a plausible alternative.

He goes on to explain that the formula proves the rate of Isostatic Rebound and by so doing supports the earth expansion theory. How is this possible?

Richard Guy, the Jamaican author of “The Mysterious Receding Seas,” while congratulating Mueller on his theory says he has issues with the premise.

Guy states that “Isostatic Rebound” as a theory does not exist and points out that the rate of Isostatic Rebound shown by Mueller’s formula is, coincidentally, the identical rate of earth expansion expressed by the Rand McNally Earth Expansion Table.

The Professor stresses that Post Glacial rebound is based on the original premise that the land mass arose from the sea. That original Darwinian premise was wrong, according to Guy.  The opposite is true. The land is not rising, it is the sea level that has been falling away from the land as the earth expands.

Guy cites examples of the seas recession over time. These are some of the facts that Guys research has discovered. They are all contained in his book “The Mysterious Receding Seas” along with the Rand McNally Earth Expansion Table which is obtainable on his Web Page at: www.recedingsea.com