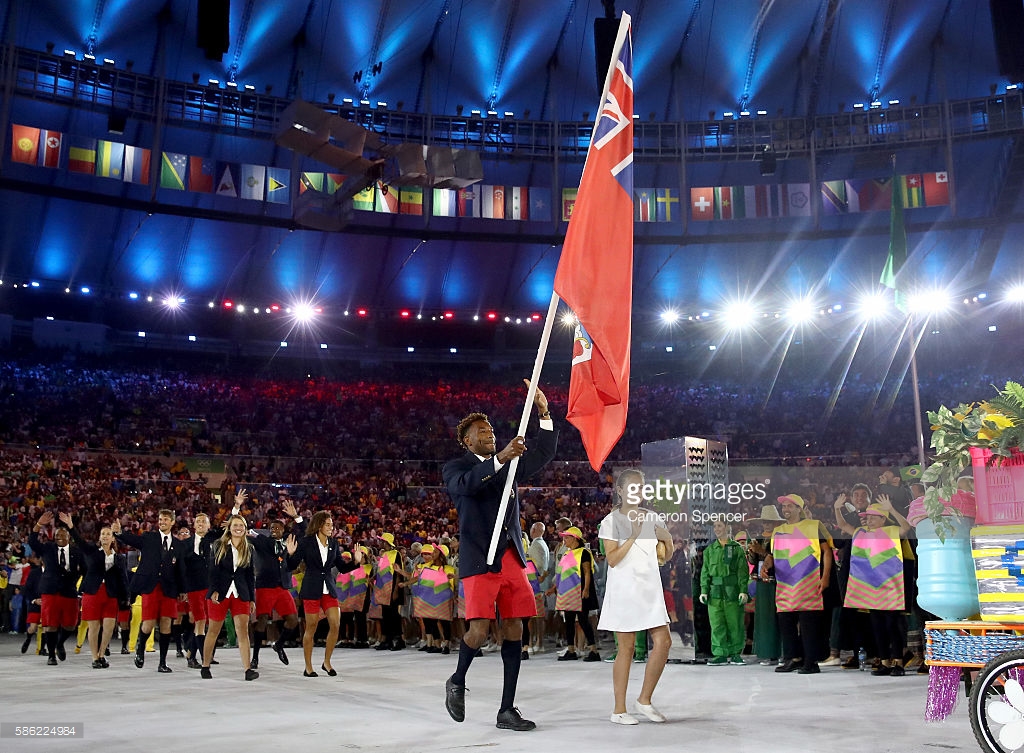 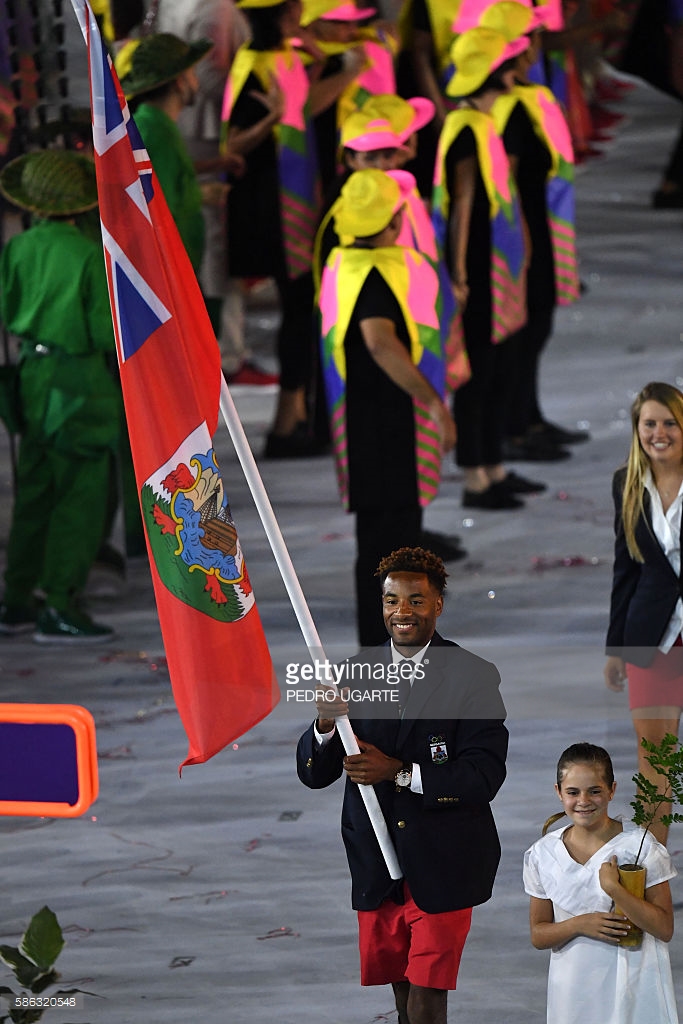 You saw him carrying the flag of Bermuda into the Olympic stadium at the opening ceremony of Rio 2016! Tyrone Smith was actually born in Bermuda but grew up in the Chicago suburb of North Chicago.

Smith, 32, will compete in the men’s long jump competition, which gets underway on Friday night, August 12th, at 8:20 P.M. at the Olympic Stadium.  Smith attended NCCHS and Novak-King Middle School in Chicago. At NCCHS he was a member of the Track and Field team as well as the Football team. Following High School he pursued a collegiate career in both sports at the University of Missouri-Rolla (UMR), now the Missouri University of Science and Technology, eventually deciding after his freshman year to concentrate in track and field.

He is a three-time NCAA Division II All-American in the Long Jump and holds the school records at both the indoor and outdoor long jump. Smith won Bermuda’s Athlete of the Year three times, 2011, 2012 and 2013 and has competed at the 2008 World Indoor Championships and the 2008 Olympic Games without reaching the final. He competed in the 2010 Commonwealth Games for Bermuda and reached the finals of the 2012 Olympic Games. His personal best jump is 8.22 metres, achieved July 26, 2010 on a gold medal winning performance in Mayagüez, Puerto Rico during the 2010 Central American and Caribbean Games. This is the Bermuda National Record. 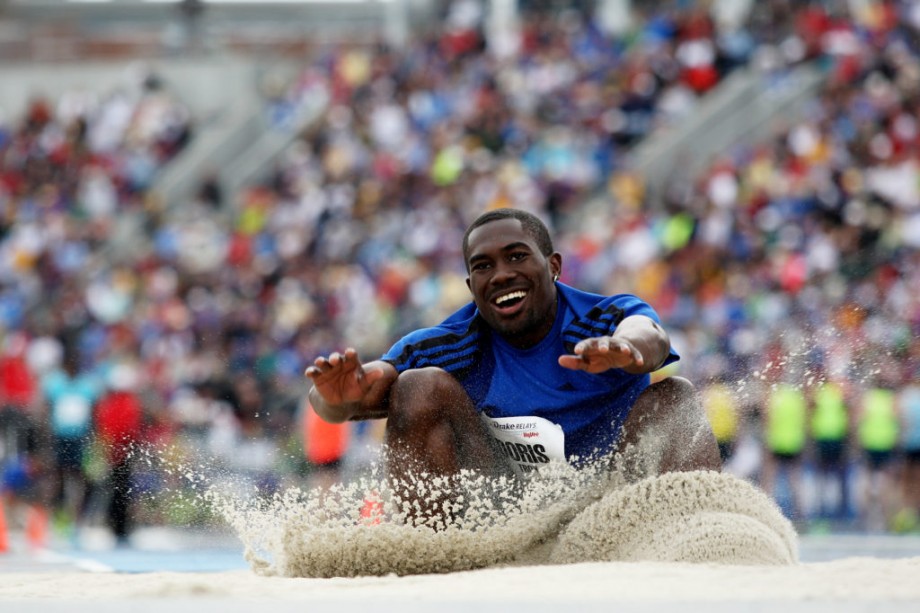 Troy Doris was born in Bollingbrook, Illinoisto Guyanese parents and is now representing the South American ‘Land of Many Waters’ in Rio.  The Iowa University standout currently has the second best jump of 2016 with a leap of 17.10 meters which also happens to be a national record for Guyana. Doris, 27, will compete in the men’s triple jump on Mon, Aug 15th at 8:30 A.M. 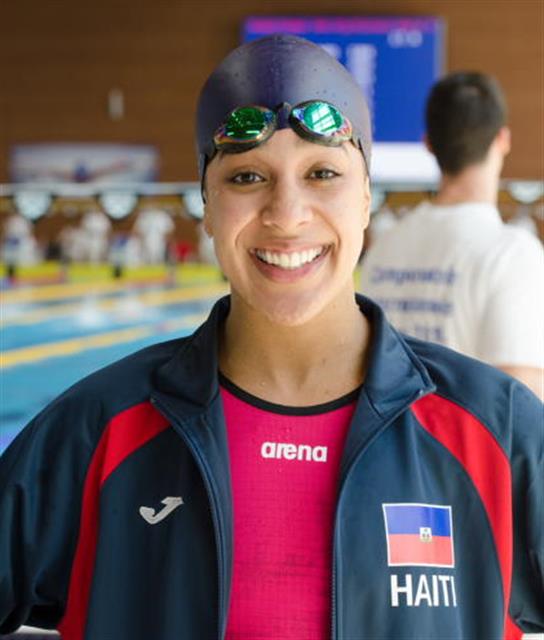 Nineeten-year-old Naomy Grand’Pierre was born in Montreal, Canada to Haitian parents but raised in Atlanta, Georgia. The rising sophomore at the University of Chicago is competing for her parents’ nation of Haiti in the 50-meter freestyle women’s event which gets under way in Rio at 12:02 p.m. on August 12, 2016. Grand’Pierre will swim alongside Simone Manuel and Abbey Weitzel from the United States, the Campbell sisters from Australia, and other medal hopefuls. This Haitian American easily established herself as the fastest swimmer for Haiti in May. 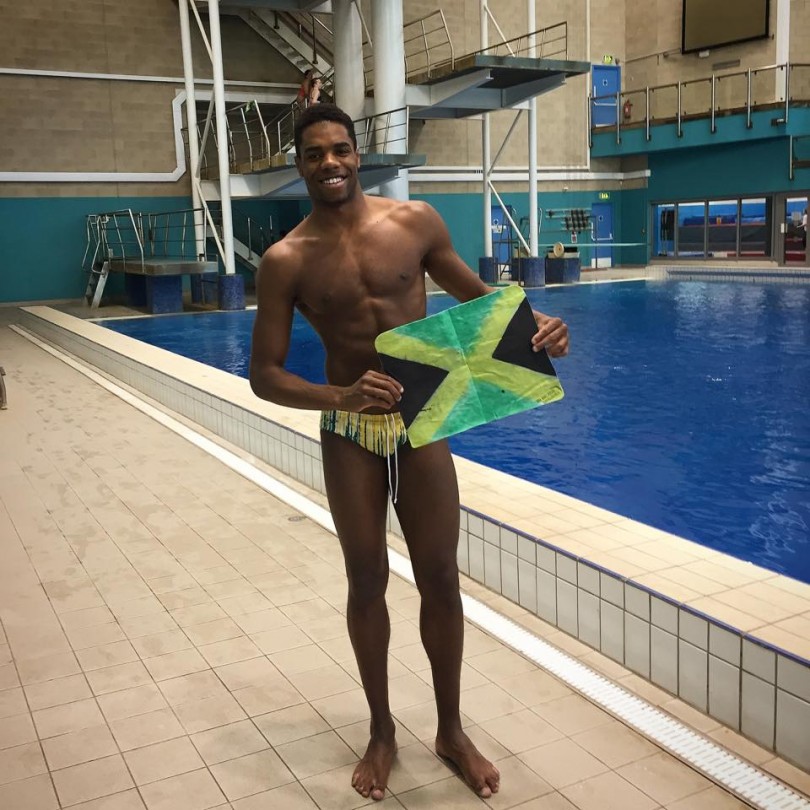 Yona Knight-Wisdom was born in Leeds, UK and is a male diver who is currently competing for Jamaica as the first male Jamaican and Caribbean diver at the Olympics. Wisdom is the son of a Jamaican father and a Barbadian mother. He also dives for City of Leeds Diving club along with British divers Jack Laugher, Chris Mears, Rebecca Gallantree and Alicia Blagg and competed at the 2015 World Aquatics Championships. Knight-Wisdom studied at Leeds Grammar School, and is a graduate of Leeds Becket University, where he studied sport and exercise science. He will compete in the Men’s 3m springboard competition on Mon, Aug 15th in Rio. 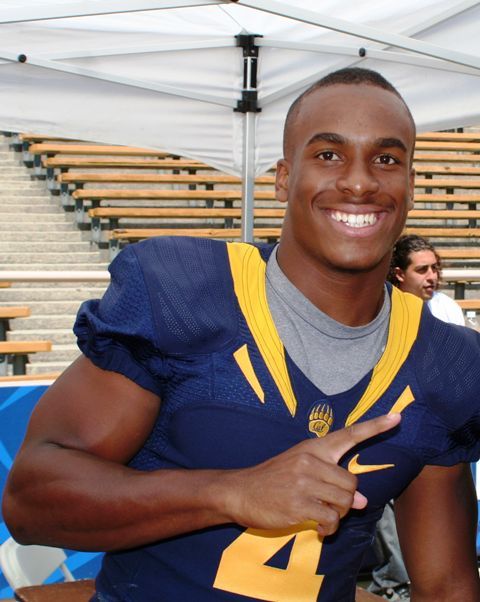 Former Detroit Lions running back in the National Football League (NFL). Jahvid Best is representing his father’s country of birth, St. Lucia at Rio 2016. Best has a tough task on his hand. He is up in the hottest race in Rio where the World’s fastest man is looking to shatter his own records. Best is up in Heat 1 of the Men’s 100-m track and field event on Sat, Aug 13th at 8:30 AM. Best took up running after being let go from by the Lions for concussions he suffered throughout his career. But qualified for the Olympics with a 10.16 +1.9 at a meet at the University of California, San Diego and onn July 16, 2016, Best was named to Saint Lucia’s 2016 Olympics Track and Field team. 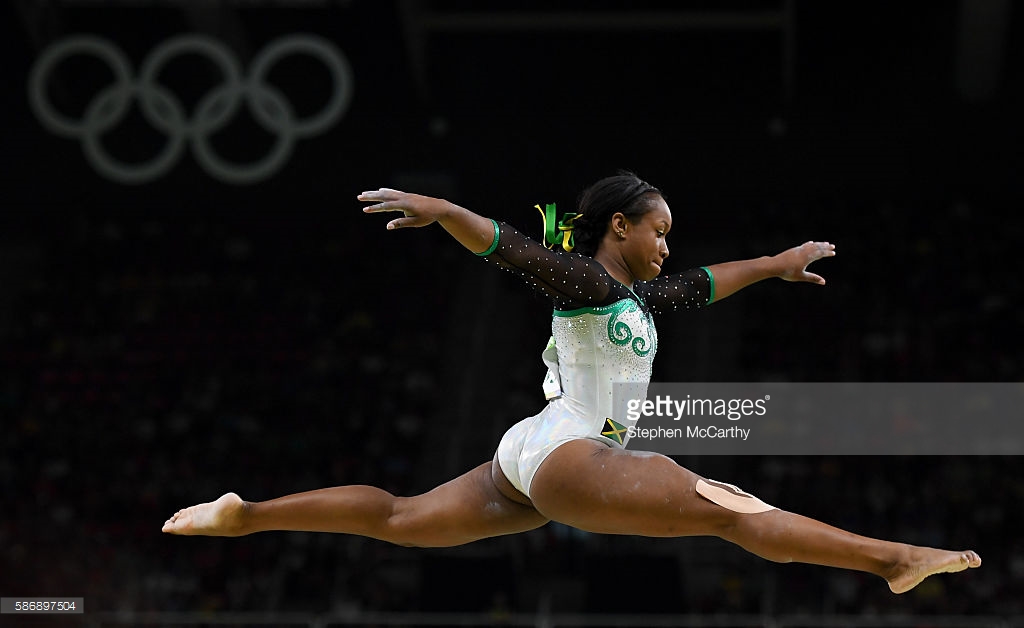 Toni-Ann Williams, 20, competed in artistic gymnastics for Jamaica at Rio on day two of the Olympics on Sunday August 7, 2016. Williams was born in Maryland to Jamaican parents and attends the University of Berkeley. She finished 54th and was eliminated from the individual event.

Williams had amassed 50.966 points from her four rotations and scored 13.200 to place11th out of the 19 competitors after her first rotation – the floor exercise. She then scored an impressive 14.100 on the vault and was eighth after two rotations with 27.300, trailing by 1.799 points. The Maryland teen then picked up 11.533 points on the uneven bars after a small slip-up and a misstep on her landing and was 10th before collecting 12.133 on the beam where she lost her balance and fell off. 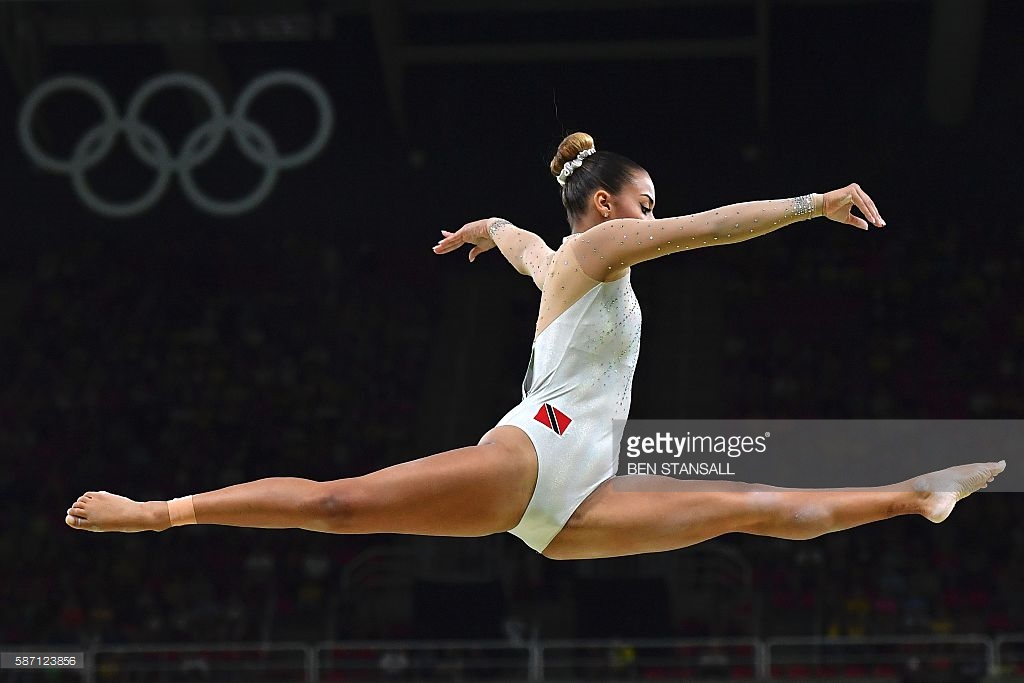 Marisa Dick was born in Alberta, Canada to a Trinidad and Tobago mother. Dick replaced Thema Williams in the Trinidad and Tobago gymnastics team for Rio even though Williams beat Dick at the World Championships in Scotland last year. But Williams, 20, was controversially pulled out of the test event in Brazil by the Trinidad and Tobago Gymnastics Federation hours before it was due to begin. Dick was named to the team. On Monday, August 8, 2016, she was third up in the first rotation on the balance beam, scoring 13.066 and was second up in her second rotation on the floor exercise, notching a score of 12.533 For the third rotation on the vault, Dick was again in position number two scoring 13.9 and on the fourth and last rotation on the bars, Dick was first up in her group to compete, finishing with a score of 11.333. But even though she did not make it to the finals, the young gymnast has already created history by creating a new signature move on balance beam. The move utilizes a springboard to mount the beam at the beginning of her routine. What is special is that she uses the springboard to launch her into the air and land on the balance beam in a perfect split. The move made its official debut at the world gymnastics competition held in Glasgow, Scotland. The move known as ‘The Dick’ has been made official and now appears in the Code of Points bearing her name.

The Future of Barbados Does Not Include Waste

They Never Left The Red Zone Areas Of St. Vincent And The Grenadines

Odor Shuts Down Schools On This Caribbean Island Again

Snowden ‘chose not to release’ most damaging data – Fox News

What Edward Snowden’s Allies Say About Him Being Stranded In Russia – Business Insider...

The Future of Barbados Does Not Include Waste