Home Latest News Features Spare A Thought For The DREAMers 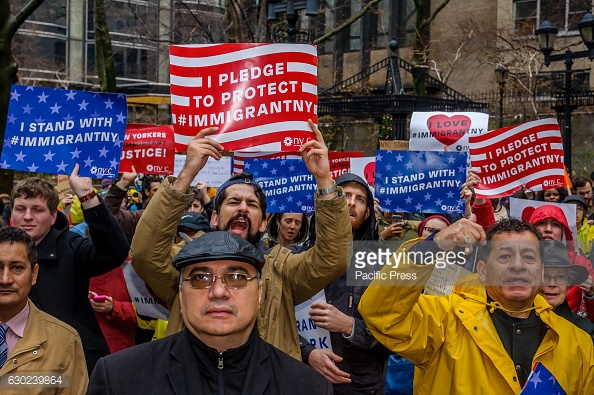 News Americas, NEW YORK, NY, Fri. Jan. 20, 2017: I thought I had problems this week until I contemplated what it must be like to be a DREAMer right now. You know- a young immigrant under 30 who benefited from President Obama’s Deferred Action for Childhood Arrivals (DACA) immigration executive order – but who could now face deportation under the Donald Trump administration.

For someone who sweated it out waiting essentially undocumented on my employment sponsorship to be approved, I can only imagine what these 800,000 young immigrants must be feeling right now.

The fear and the dread must be all too powerful. Can you imagine waking up in the middle of the night thinking that the life you have known for the past 15-20 years could be changed for the worst?

Imagine walking around in your school, college or work place in daily trepidation, thinking of being rounded up, ripped apart from your family and deported back to a land you hardly ever knew.

It’s hard to imagine what it’s like to be an immigrant who has been undocumented for years, then being able to obtain a work permit and a travel document. There is a real, unexplainable joy and achievement in that after seeing no hope for years.

It’s much harder to then go back to being undocumented; to having that  work permit and travel document you have come to welcome ripped away when you have just learnt to breathe a little easier. But not only to have it ripped away and face being undocumented, ‘illegal’ and scared again, but to also face detention and deportation.

Unless you have walked in the shoes of an undocumented immigrant it is hard to understand much less empathize.

It is so easy to say they broke the law; it is easy to say ‘go back where you come from;’ it is easy to throw around terms like ‘illegal’ and ‘no amnesty’ and deport them all even though many of us profess Christianity and hold our bibles aloft in church on Sundays.

It’s much tougher to understand the limbo these young people are living in right now. Many of us would be jumping off the Brooklyn Bridge right now if we faced this threat.

It is unfortunate that President Obama with all that he managed to do over the eight years, failed to get immigration reform passed. It should have been done when he first went into office and had control of the Senate and the House.

But that’s history. For now, Democrats and right thinking Republicans must fight harder at Senate confirmation hearings to prevent the appointment of hardliners like Jeff Sessions from ever becoming attorney general.

They must do a better job of asking Donald Trump’s Home Security pick Gen. John F. Kelly where he really stands on DREAMers and quit with the soft ball line of questioning.

Be bold like newly elected Jamaican roots California Democratic senator Kamala Harris, and ask the tough questions on behalf of these young people who have no voice right now.

Let’s spare a thought for these outstanding DREAMers, say a prayer for them and stand up for these amazing young men and women who are and can continue to make phenomenal contributions to this country! I can only hope Donald Trump, despite his mad hatter personality, recognizes this too!

The writer is CMO at Hard Beat Communications, Inc.