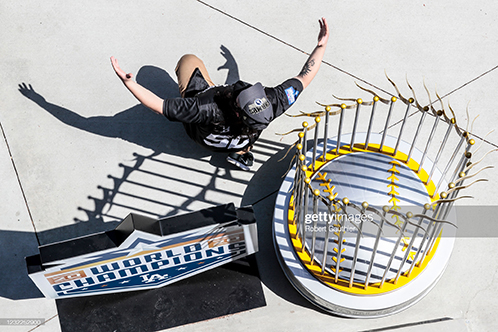 News Americas, NEW YORK, NY, Tues. May 18, 2021: The MLB season is just a few months away and while the offseason has been slow, with some good deals made but still lukewarm at best, why not swing for the fences and start talking about some World Series futures. For example, if you look at the world series odds from the top online sportsbook websites around you might see that the LA Dodgers are looking better and better every day to repeat as World Series champions.

But wait, just because everyone is jumping on the Dodgers bandwagon it doesn’t mean that there are no other strong contenders that can give LA a true run for their money so let’s break down who are looking best to go for the 2021 World Series Title, yes, including the Dodgers.

It was impossible to begin this list without mentioning the elephant in the room, yes, the defending World Series champions LA Dodgers. After acquiring Trevor Bauer from the Cincinnati Reds for a whopping 3-year $102 million deal their championship pedigree has bolted to uncharted territories. With the addition of Bauer LA went from having one of the top 5 best pitching rotations in the league to basically burning that bridge and standing on an island of their own. An island where Bauer, Kershaw, Price, Urias and Buehler call the shots.

So the pitching is taken care of, but what about the rest of the team? With two surefire MVP candidates such as Mookie Betts and Cody Bellinger, plus shortstop Corey Seager and a returning Justin Turner there is no way the Dodgers can get any better. Now that they were finally able to get the chip of winning the World Series championship again off their backs the matter is how many more can they win.

Remember a little while ago when we mentioned that the Dodgers before had one of the top 5 rotations in the MLB before, now actually holding the best one. Well if there was any team at all who could give them a true run for their place at the top of the hill it’s the San Diego Padres. It seems like the trend in central and southern California is to gear up for some seriously good baseball to come. While trading for Blake Snell can be counted as enough to propel the Padres to World Series contention, they didn’t stop there. Their front office put on their big boy pants and went out into the market to acquire both Yu Darvhish and Joe Musgrove. Add to that Chris Paddack and that will be a killer rotation at the least.

On the field, with a lineup that can score boatloads of runs, with Fernando Tatis Jr. and Manny Machado as the leaders of that core supporting the great pitching staff, expect the Padres to go far into October.

How long has it been since the Yankees actually felt like the New York Yankees? You know what we’re talking about. The team that every other team in the league would aspire to be and also fear. Well, for a few years running the Yankees have been more of an afterthought than a fear mongering baseball machine. That doesn’t mean they haven’t been working on getting back to the good old days though. With a lineup loaded with talents such as DJ LeMahieu and Aaron Judge, Giancarlo Stanton’s bat power when healthy and guys like Clint Frazier and Gleyber Torres they shouldn’t worry about getting the job done on the field both on offense and defense. What they truly need is for their rotation to stack up when needed most. Having guys like Gerrit Cole, Corey Kluber, Luis Severino and a hopefully fully healthy Jameson Taillon all in sync can finally push the Yankees past their past postseason flops.

Tell me a good, decent professional sports team other than the White Sox in Chicago. No actually, don’t, there is no better pro sports team in Chicago than the White Sox. Their batting order is brutal, with guys like Grandal, Eaton and Madrigal. They have one of the best and most entertaining players in the game right now, shortstop Tim Anderson leading the helm of a group of All-Star quality players like Eloy Jimenez and Yoán Moncada to name a couple. And their rotation, their first three starters, Giolito, Lynn and Keuchel, that’s exactly the kind of team you want to be betting on if you’re looking for an entertaining pick that can pay off in the biggest ways.

Guyanese Olympian Is Now Head Coach At This NY College

NYPD Steps In To Make One Caribbean Street Party Safer