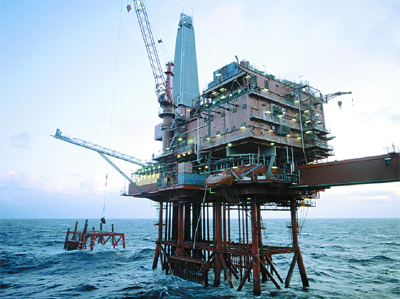 News Americas, LONDON, England, Fri. Sept. 21, 2018: Three weeks ago, Trinidad and Venezuela reached an agreement on the supply of gas from the latter’s Dragon Field, through the creation of 17-km undersea pipeline that will link it to the National Gas Company of Trinidad’s off-shore Hibiscus Platform.

The arrangement will enable Venezuela for the first time to monetize internationally, the natural gas from its Mariscal Sucre offshore fields, while enabling Trinidad to have a cheap sustainable energy supply at a time of declining national production.

Shell, whose executives were present at the signing, holds the right to drill on the Dragon Field and is a shareholder in the Hibiscus Platform. They are likely to be a significant beneficiary through a joint special purpose company.

In making the announcement, no mention was made of who will be financing the US$100-m venture or the price or terms on which Trinidad would be obtaining the gas. However, the decision appears to form a part of a closer energy relationship that the two countries have been discussing for some years.

In a television and radio addresses in Trinidad & Tobago following the signing, Trinidad’s Prime Minister, Dr Keith Rowley, said that Venezuela’s gas reserves were economically and logistically more marketable from Trinidad than from Venezuela.

Suggesting that the arrangement was strategic and was likely to lead to further ties, he said that what had been agreed was based on a “competitive gas pricing mechanism” which would also allow for the development of “south coast cross-border fields which we share with Venezuela.”

A separate statement from PDVSA, Venezuela’s state oil company, quoted the country’s President, Nicolás Maduro, as saying that the agreement was a move in the direction of “a comprehensive energy partnership” to exploit jointly-owned common undersea reserves.

The Trinidad-Venezuela agreement was followed a few days later by an announcement from ExxonMobil that it had made a ninth oil discovery offshore Guyana at its Hammerhead-1 well.

The company said that the discovery reinforced the potential of the Guyana Basin and indicated that its subsequent plans for development would be rapid. Exxon also said that exploration would be accelerated. In doing so, they effectively confirmed earlier announcements about the ‘world class’ nature of their finds off Guyana give weight to industry estimates that production of up to 750,000 barrels per day by 2025 is possible.

Exxon’s statement was followed by another from Tullow Oil and Eco-Atlantic, that they are preparing to drill on an adjacent prospect off Guyana, which they estimate contains 3bn barrels of oil and gas. Strikingly, they noted that Exxon’s find had ‘de-risked the perspectivity’ of their nearby Orinduik block.

Since then, it has become apparent that Trinidad and Guyana are close to signing a memorandum that will provide for help and advice on Guyana’s emerging oil and gas sector. This long discussed and locally controversial idea, will, according to Dr. Rowley, open the way for Trinidadian “companies to participate in that prosperity that is coming to the Guyanese even if Guyanese oil does not come to our refinery.”

Trinidad’s prime minister also reportedly told the same political meeting in Marabella that new opportunities may emerge in Jamaica because of its growing use of LNG and disinterest in Venezuelan oil.

Why these developments are worth describing at length is because they demonstrate how oil and gas finds are set to alter rapidly inter-Caribbean relationships.

They also illustrate Trinidad’s interest in playing a pivotal regional role as its own energy possibilities diminish: something that some nations in the Caribbean may find hard to embrace, based on past experiences.

The Caribbean has tended to be characterized as a region of small fragmented economies driven by tourism, off-shore financial services, commodity-based agriculture, with limited opportunities for mineral extraction.

However, this is changing. In recent months, for good and ill, there has been a surge in coverage in the international media, often surprised and sometimes negative, suggesting that the region is about to become of global significance as a Western Hemisphere source of hydrocarbons, and by extension, an important strategic partner.

Why this should only now be considered is a mystery. Over the last two years, multiple reports have indicated that huge sums are, or are likely to be, invested by major oil and gas companies from the US, the UK, China, Russia, Australia and elsewhere in prospecting off the coasts of Barbados, Suriname, The Bahamas, French Guiana, Cuba, Jamaica, the Dominican Republic, Haiti, Grenada.

If delimitation talks between Cuba, the US and Mexico proceed, an area in the Gulf of Mexico, known as the Western Polygon, is also likely to see an inflow of investments.

Unfortunately, much of what has been written recently about the potential for new-found wealth is obscuring a more important Caribbean debate – about where further finds will lead and the implications for the region.

Most analysis misses the point that while oil can bring extraordinary public wealth, especially to small nations, it must bring real and lasting benefits to the citizens of the country that owns what is a finite resource.

That is to say, not just monetary reward in lowered taxes, but through the much-improved provision of education, health care, pensions and social support.

It also fails to consider in practical detail, the ways in which the huge investments being made in extraction can be put to work beyond generating private sector growth and short-term employment. By utilizing income for technical and academic training, for restructuring an under resourced public sector and the creation of a well-paid professional managerial class of civil servants and regulators, future energy dividends can be made to last far into the future.

Secondly, there is an important debate to be had about whether oil and gas, when discovered, should be monetized or utilized in the region or should be exported for refining elsewhere. Much of the Caribbean has sound environmental and tourism reasons not to want onshore, polluting, high carbon emitting refining or downstream industries.

Thirdly, the political and strategic implications require careful exploration. The announcement of the new arrangements with Venezuela, an all but failed state, comes at a time when the US administration is trying to isolate the Maduro government through sanctions and other measures and is moving against growing Chinese investment in the region. It is also demonstrating its willingness to retaliate against Caribbean nations that do not comply with its wishes.

And fourthly, transparency is essential. In both large and small developing countries, oil and gas wealth has disappeared into the pockets of, or more likely the offshore bank accounts of, a few in politics and business.

There is much more to be written on each of these topics, but the announcements of late August and early September suggest the need for a fundamental debate across the region about the social as well as the economic, political and strategic consequences of becoming energy rich.

New Oil Discovery Made In This Caribbean Community Nation

TT Athlete Released After Questioning Over Hit And Run Accident