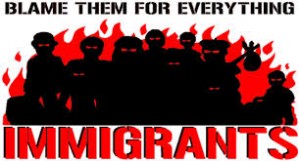 News Americas, NEW YORK, NY, Fri. July 17, 2015: Shortly after 10 a.m. ET on Friday, July 10, 2015, the controversial Confederate flag on the grounds of the South Carolina Capitol was taken down after a 54-year run; handed to one of the state’s two black Cabinet-level officials and then taken over to a state military museum where it will now be displayed as the relic it is.

And while many in South Carolina and across the country celebrated, several on the right found a way to again make that poor GEICO goat ‘Rick’ bleat in horror as they turned their anger over the flag to scapegoating immigrants.

Of course suddenly Haley is an “immigrant” while Coulter is the paragon of a ‘true’ American so only she can understand the flag and continue to promote its one-sided history.

To make matters worse, Michelle Hickford, former press secretary and current editor-in-chief for former Republican congressman Allen B. West, took to West’s website on Wednesday claiming that if the Confederate flag and the Charleston nine shootings are related, so is the murder in San Francisco of Kathryn Steinle last week by an undocumented man and all undocumented immigrants.

Here is the exact quote from Hickford that is more outrageous than my paraphrasing.

“If you are willing to believe the Confederate flag is responsible for generating hate that pulled the trigger and brutally murdered these nine innocent people, then you must express equal, but frankly, far greater outrage for the thousands of heinous crimes committed by illegal aliens,” Hickford wrote.

Not sure what Hickford is smoking but at no point in recent history has any immigrant, documented or not, walked into any building much less a church and slaughtered nine people in cold blood.

No Ms. Hickford, that was the ‘All-American White boy” Dylann Storm Roof, who filled with hate by rhetoric from the right and conservatives as a whole, killed nine black God fearing people in the Emanuel AME Church in South Carolina, hurled racial epithets at them as thelife was seeping away from their bodies and was then seen in photographs with Confederate flag merchandise.

But not a word on that from Hickford! Instead it is immigrants who were attacked as she steamed: “And if anyone who displays a Confederate flag could be potentially a hate-filled racist capable of murder, then anyone coming here from another country is potentially a murderous criminal.”

Wow! Really? That means so were your fore parents too because the last time I checked, like Coulter, you were not Native American.

Luckily the numbers speak for themselves. As the experts posited recently in the Washington Post, immigration and crime levels have had inverse trajectories since the 1990s with immigration increasing but crime by immigrants decreasing.

The reality is that undocumented people risk deportation for even minor crimes like a DUI and immigrants seeking to get a green card must pass a background check. Further, more immigrants have been deported under the Barack Obama administration than in any Republican administration!

It is obvious what this is. Another move by the right to target politically powerless undocumented immigrants and make them scapegoats. But what they’re forgetting is that the number of foreign-born people in the United States is at an all-time high – at 40 million – and forty-four percent of all foreign-born people are naturalized citizens and eligible to vote. Most will in 2016 as they will again reject a Republican leader for the White House and send the Party to possibly the same place the flag had gone – a museum.

Cuba Doubles Down On Allegations Of U.S. Subterfuge