News Americas, FORT LAUDERDALE, FL, Fri. Dec. 6, 2019: Like many, I too was last week furious when I read the Detroit Free Press story that stated that US ICE had arrested over 250 immigrant students since January, who were enrolled in a fake university set up by the Department of Homeland Security in Michigan. Of course, my first instinct was to slam the Trump administration and its new low. Until of course I stopped to do my research and nearly fell out of my seat.

What the Free Press did not mention was that this fake university, as well as another set up in 2013 in New Jersey, were all done during the Obama administration, while Jeh Johnson was head of the Department of Homeland Security.

Yes, you read that right. This sting operation that engaged in entrapment, deceit and eventual “robbery” of foreign-born immigrant students was way before Donald Trump’s time as President.

The fake University of Farmington, registered with Detroit’s state Department of Licensing and Regulatory Affairs and located in the basement of the North Valley office complex located at 30500 Northwestern Highway in Farmington Hills, Michigan, which the Free Press’ article focused, on was set up in January 2016, while Trump was still campaigning and President Obama was in his  last year of office.

Now many who know me will attest to the fact that I am no fan of Donald Trump. But I’m all about balance and fairness and the fact that this sort of DHS skullduggery was being done under the Obama administration against immigrants who were not criminals in any real sense, but simply wanted to study in this country and could be an asset to it, blew my mind completely.

I was in shock!

And then I found that another fake university had been created by the DHS’ Homeland Security Investigations, a directorate of U.S. ICE – again under the Obama administration. This was done in 2013, one year after President Obama won a second term in office.

The University of Northern New Jersey, (UNNJ), like the one in Michigan, was also reportedly set up to “investigate student visa fraud.” It claimed to be based in Cranford, New Jersey, with plans to expand to Harrison, Hoboken and Morristown.

And like in Michigan, the government rented space – this time at 25 Commerce Drive, Cranford, New Jersey and promoted it as its campus. It created an extensive Internet presence, including an elaborate website with a .edu domain name, created a crest bearing a remarkable similarity to that of Princeton University with a Latin motto, and set up a Facebook presence led by the university’s “president,” a character named Dr. Steven Brunetti who even had a LinkedIn page.

And like with the Michigan operation, the UNNJ was also accredited by the Accrediting Commission of Career Schools and Colleges (ACCSC) and recognized by the State of New Jersey.

In April 2016, however, Paul J. Fishman, the U.S. Attorney for the District of New Jersey, and Sarah R. Saldaña, the then director of US ICE, announced that the sting operation had ended with the arrests of 21 people.

Federal agents posed as university officials and worked with the 21 people they arrested and used brokers. They had to then recruit other international students, mostly from China and India, to “attend” UNNJ.

The government claimed, “the brokers” knew that UNNJ did not offer real classes yet “charged the students in a scheme that allowed them to maintain their student visas and stay in the country,” and in some cases, illegally arranged for jobs and work visas. They also said the brokers engaged in an illicit “pay to stay” visa scam.

According to Saldaña at the time, the brokers arranged student visas for 1,076 people, most of whom had their visas revoked.

But the students, according to a New York Times report in 2016, said that they had been deceived by the government through “in-person meetings with the university’s supposed president, letters confirming they could work instead of go to class, and Twitter messages about classes canceled because of bad weather.”

Rachael Merola, a senior researcher at the Observatory on Borderless Higher Education, at the time called the U.S. government’s establishment of a fake university at the time a “novel strategy” in combating student visa fraud.

She also added the strategy was highly effective but would likely not be replicated in the future, stating, according to the Times: “If anything, the massive amount of coverage that this got would sound an alarm and might act as a deterrent in the future to unscrupulous agents and sham universities.”

But sadly, she was so wrong. The same exact strategy was replicated in Michigan and it was business again as usual with immigrant students – not hardened criminals – becoming victims – all under the Obama administration.

So, what does all this prove? That Republican or Democrat – immigrants remain the scape goats and political football in a pervasive anti-immigration culture here in the good ‘ole USA. 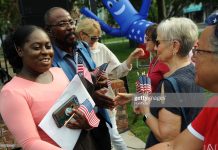 Is ‘Illegal Immigrant’ an Insulting Term? – The Root (blog)