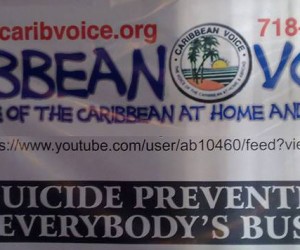 News Americas, NEW YORK, NY, Fri. Dec. 26, 2014: About a week or so ago, in an email discussion on suicide and suicide prevention, one of the recipients asked about the credentials and capacity of The Caribbean Voice as it relates to suicide prevention.  Given that we launched our suicide prevention campaign about eight months ago, I thought the question was a fair one.

So here goes: The Caribbean Voice comprises thirty suicide-prevention advocates/activist, drawn from the USA, Canada, the UK and the Caribbean, including Guyana, among whom there are three pastors and three pandits, along with educators, youth activists, women’s activists, social activists, community activists, media personnel and individuals of varied skills and experiences.

This grouping includes a technical team of six highly credentialed and experienced counselors/social workers. Additionally there is board of directors of eight highly successful businesspersons and professionals and a team of five spokespersons drawn from the media and performing arts world. We work along with more than 20 strategic partners – other NGOs and businesses from North America and Guyana – as well as bunch of other stakeholders in Guyana, including some ministries of the government.

Since the launch of our suicide prevention campaign also, we have effected 70 interventions in nine countries and six states in the US, and have dealt with people of all ages, varied ethnicity, both genders, varied statuses and social standing and a range of religious/ideological outlook.

Not all of the individuals were suicidal or indicated that they wanted to harm themselves. Some needed a person to listen and/or wanted to be given the opportunity to vent some their pent up emotions due to whatever was currently going on in their personal lives. Some individuals were in physical pain, financial stress, relationship difficulties and experiences and were confused about and/or wanted to know how to manage their circumstances. Suicide aside, we dealt with domestic violence, sexual abuse (including incest), dysfunctional relationships, alcoholism, drug abuse, teenage pregnancy, the generational gap, potential school drop outs and issues of discrimination – real or perceived.

Also we have been privy to information and cases that never made the news. For example, a housewife was brutally beaten by her husband. Feeling ashamed and helpless she became suicidal and rejected suggestion to go to the police or get counseling. An NGO was called in and she was taken to hospital. Two days alter, after leaving the hospital, she did, in fact, commit suicide leaving behind a young teenaged son who seems lost and forlorn, a mother who refuses to get counseling for the child claiming she would deal with child her own way and an abuser against whom no legal action has been taken. To compound matters, the mother is emotionally wrought and this means there are two other lives at risk of suicide – the son and the mother. This particular case also brings into question the issue of respite-stay, and follow up care, perhaps even half way houses.

Then there was a thirteen-year girl who was being raped by her stepfather, when the mother/wife walked in on them. Rejecting the child’s assertions that she was forced into the act, the mother beat the child who then committed suicide. When questioned by an interested outsider, the police stated that they knew nothing about rape. That interested outsider concluded that police were bribed by the stepfather, who apparently, is a businessman.

In one case a teenager expressed a desire to commit suicide because of some issue with the parent. The parents’ response?: “Come me go give you de poison.”

Situations like these indicate many needs: that suicidal mindsets including warning sigs through words said, must never be responded to flippantly; that parent/children communication is a huge problem and that family dysfunction is a growing problem. As a matter of fact it is an open secret that rapes and incest are completely disregarded by the police once money change hands.

We have also received reports of suicides not being recorded by police because of bribes being offered and this is why we strongly believe that as high as the numbers are, suicide is still somewhat under reported in Guyana. This desire to hide ‘suicides’ stems for ‘shame’ and ‘family dishonor’, which are still prevailing responses to suicide in Guyana as well as in the Diaspora.

Since The Caribbean Voice launched its suicide prevention campaign in Guyana, stories like this abound. In fact a recent visit to a trade school in Georgetown revealed significant depression with quite a number of students exhibiting suicidal tendencies. In one on one chats they revealed that their depression was brought on mostly by family problems: living with abusive step-father; mother not having time for them; being abused by parents and living with relatives who ill treat them.  The upshot is that young people feel disenfranchised, lost and a burden.

In fact, we have found that many young people make the same confessions online. Naturally, many act out because they feel that today is all they have. And some teenaged females are pushed into situations because some parents feel that ‘after 12 is lunch”, which means “she is old enough to take a man so let someone else take care of her.”

Our investigations also revealed the existence of a ‘sex bus’ on which young people, mostly students, travel for a fee and anything goes during the time spent on the bus. Worse yet is that parents, schools and related officials seem unaware of this situation.

In effect, what started out as a suicide prevention campaign, has morphed into a social activism campaign, with the needs being overwhelming and the resources (human, financial, logistics), being awfully inadequate to make much of a dent. And so our appeal to all and sundry is to please get involved, if not with The Caribbean Voice, then with any other NGO that works to redress these issues. We also appeal to your generosity – a donation of even five dollars can help. And we appeal to your humanity – even the smallest act of kindness can make a difference and each person can perform one act of kindness each day. More importantly, please never disregard a cry for help or a warning sign – take time to listen without judging and seek help for the person/persons crying out. Remember the greatest happiness comes from seva – service to others! And, as the great Mahatma, Mohandas Karamchand Gandhi said, ‘be the change you want to see’.  Also, remember that instead of cursing the darkness, it is better to light a candle.

Reach out to us; share your ideas; offer suggestions; encourage others to get involved. Remember suicide prevention is everybody’s business and suicide is not the answer. Help us save lives, build healthy relationships, lift up others and create a caring and compassionate society.