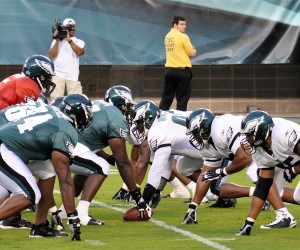 News Americas, NEW YORK, NY, Weds. Dec. 10, 2014: The world of pro-sports is usually populated by the notions of rivalry, vendetta and outright competition. It’s the way fans like it, it provides teams a reason to really push forward and to be honest, it makes our favorite pastimes a lot more interesting to watch. After a while though, the endless posturing and trash-talking becomes a little tiring, if not downright depressing, and all one really wants is for something nice to happen! Thankfully, sport is a rich tapestry, brimming with lots of feel-good stories that counterbalance the usual drag. Here are some of our personal favorites.

Some rivalries are destructive, whilst others are decidedly more serene and constructive. The rivalry between the Green Bay Packers and the Chicago Bears is definitely the latter; one of the US’ largest cities vs. one of the smallest to have an NFL franchise. With fan groups only four hours from one another, the two teams having played 189 games between each other (the most in NFL history) and these games having been distributed 93-90 with six ties to the bears, the rivalry is fit for a screenplay. What’s best though is that there isn’t any bad blood between the two sides, both having a mutual respect for one another- after all, 48 members of the Football Hall of Fame came from these two teams! Although pundits and websites such as NFL betting site bettingsports likely view the rivalry as a murky, very un-safe bet, we imagine that the latter especially gets quite a fair few wagers when the Packers meet the Bears on the pitch!

The NFL has had a huge amount of bad press recently; scandal after scandal has truly tarred the image of the game, and fans of all colors are feeling the disappointment. Luckily, however, something good has finally happened on the NFL scene! Ma’ake Kemoeat, offensive lineman for the Baltimore Ravens has enjoyed a great career but in September decided to retire for good. The reason? So he could donate one of his kidneys to his brother Chris (ex-player for the Pittsburgh Steelers). What a guy!

Another feel-good football story is just what the doctor ordered! This October, two Seattle high school teams (Oak Harbor and Marysville Pilchuck) were set to clash until on game day a student went on a horrific shooting spree at Marysville, killing a student and injuring several others. Instead of forfeiting the game however, their rivals from Oak Harbor showed up at a candlelight vigil Marysville were holding in order to pay their respects. Let’s hope more of these kinds of players make it to the official draft in the future.