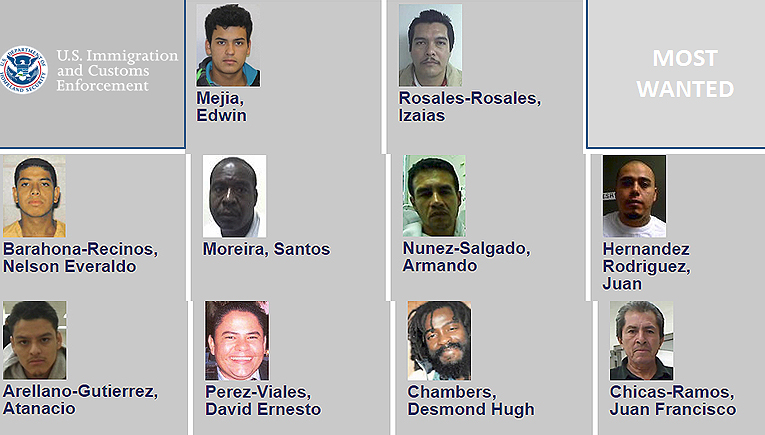 News Americas, NEW YORK, NY, Weds. Dec. 27, 2017: As the year grounds to a close and the U.S. Immigration and Customs Enforcement department touts its record year of immigrant round-ups, there are still 12 criminal immigrants that agents desperately want to get their hands on.

But they keep on eluding them to date, according to New Americas Now research. The ICE Wanted 12 are all from Latin America and the Caribbean and are all mostly ‘bad hombres,’ wanted for a number of violent crimes including manslaughter, drug trafficking and rape.

Eight of the wanted men, some convicted felons, are from Latin America, while two are from the Caribbean.

Desmond Hugh Chambers is one of the two from the Caribbean.  Chambers, 52, is a citizen of Jamaica who was convicted of possession with intent to distribute cocaine, second degree rape, first degree sex offense and false imprisonment. He was ordered removed by an immigration judge on February 5, 1997 and was removed from the U.S. on May 10, 2000. However, he unlawfully reentered the U.S. at an unknown date and despite numerous attempts by ICE to locate his whereabouts, he currently remains at-large.

Chambers also goes by the name of Warren Michael Mullings and Gregory Lemuel Green, is 5’9”, 170 pounds and has a scar on his forehead. He has been sighted in Maryland, Florida and Georgia.

The other Caribbean national making the list is Santos Moreira of Belize. Moreira, 45, is wanted for removal as a previously removed criminal immigrant with felony convictions for manslaughter, robbery with a firearm, and possession and purchase of cocaine. He was ordered removed by an immigration judge on November 7, 1995 and has had multiple previous removals but keeps on returning to the US. He was last removed from the U.S. by ICE on October 14, 2010 but unlawfully re-entered the U.S. at an unknown place and date without inspection, and remains on the lam.

From Latin America, four of the wanted men are from Mexico. They include Armando Nunez-Salgado, 38, a documented gang member who is currently wanted for removal as a previously removed criminal alien. Nunez was convicted of the following felony charges: force and assault with a deadly weapon, burglary, and hit and run. An immigration judge order him removed from the U.S. May 2, 2000, and he has been removed from the U.S. to Mexico on multiple occasions since then. His most recent removal was Jan. 19, 2010 but Nunez unlawfully re-entered the U.S. and remains on the lam.

Juan Hernandez Rodriguez, a self-admitted gang member and previously removed criminal alien with convictions for burglary and felony grand theft and Atanacio Arellano-Gutierrez, 29, who was convicted of felony weapon offense – aggravated discharge of firearm, felony burglary, and felony shoplifting and was deported, only to return to the US undetected are also wanted Mexican immigrants.

The fourth Mexican immigrant being sought is Izaias Rosales-Rosales, who was convicted in 1996 of felony burglary with a firearm and sentenced to 75 months in prison. He was removed to Mexico in 2005 but also unlawfully reentered the U.S. at an unknown date and despite numerous attempts by ICE to locate his whereabouts, he currently remains at-large.

Barahona-Recinos is wanted for removal as a previously removed, convicted criminal alien with a felony conviction in Orange County, California, for kidnapping in September, 1998. Despite being deported, he returned to the US and is at large.

Chicas-Ramos, 57, is currently wanted in El Salvador for homicide. It is alleged that in 2012, Chicas along with two other accomplices killed a young man. He is currently the subject of an Interpol Red Notice for the same offense. Chicas unlawfully entered the U.S. in 2014 and remains on the lam.

Wanted from Nicaragua is 34-year-old David Perez-Viales. Perez-Viales is wanted by Interpol for aggravated rape. He entered the US in 2013 and despite ICE’s attempts to locate him, he remains at-large.

Rounding out the top 12 is Edwin Mejia, 19, from Honduras, who is currently wanted for motor vehicle homicide. Mejia unlawfully entered the U.S. in 2013 and despite numerous attempts by ICE to locate his whereabouts, he currently in the underground.

If you have information about the whereabouts of these fugitives, immediately contact the local U.S. Immigration and Customs Enforcement (ICE) office or call the national hotline at 1-866-DHS-2-ICE.