Sophia Martelly, first lady of Haiti and wife of Haitian President Michel Martelly, on Thursday registered to run for the Senate in the Caribbean island of over 10 million people.

It is her first attempt at elected office. During her public life, Mrs. Martelly has been largely involved in charitable work and manages the Pink and White Foundation in Haiti. 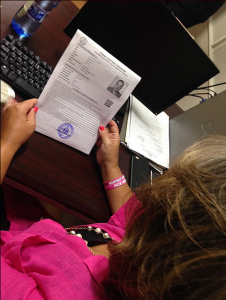 Mrs. Martelly filed the required documents to compete in a crowded field for one of 20 open seats in the Aug. 9 election, representing her husband’s party.

She would represent a Senate district that includes the capital if she’s victorious. But that could be a hurdle even before the elections since she was born in New York.

There are 301 candidates for the 20 vacant seats in the Senate and 2,012 for the 119-member chamber of deputies, according to Haiti’s Le Nouvelliste newspaper.