News Americas, TORONTO, Canada, Thurs. Sept. 8, 2016: A Jamaican immigrant who was held in detention by Canada’s Border Services Agency for the past five years was yesterday sent back to his native land.

Alvin Brown, a reported mentally ill man who was imprisoned since September 2011 because Canada reportedly was unable secure travel documents from the government of Jamaica, was finally put on a plane Wednesday morning, September 7, 2016, bound for Montego Bay, his lawyer Jared Will said yesterday.

According to the End Immigration Detention Network, Brown, 40, a father of six who suffers from schizophrenia, migrated to Canada as a child more than three decades ago. The Canadian government subsequently stripped him of his permanent residency after a series of convictions, most drug and weapons related.

He was released from criminal custody in early 2011 but border agents detained him months later for violating release conditions and he was held at the Toronto East Detention Centre until his deportation yesterday.

His lawyer now wants the Canadian government to pay his client CDN $1,500 a day because Brown’s deportation took “exponentially longer” than should have been the case.

“It should have taken no more than a year for the CBSA to have deported Mr. Brown,” Will told Superior Court Justice Alfred O’Marra yesterday. “It was cruel and unusual to detain Mr. Brown, who had mental health issues, for nearly five years.”

The current hearing was made possible by an Ontario Appeal Court ruling last year that provincial courts have jurisdiction to hear detention cases arising out of immigration law. 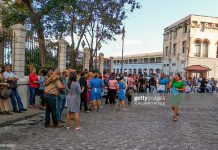 It feels good to be in Pakistan, says Ricardo Powell – Cricket News Update...

Where is Death in Paradise filmed? Guadeloupe filming locations for series 7 of the...