Home Caribbean Time For A Stronger Line On Climate Change 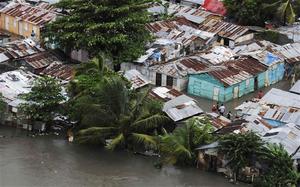 The meeting from December 1-12, will bring together governments and other interested parties to try to agree the draft text of a new and legally binding agreement that it is hoped will be signed by government leaders in Paris in December 2015.

From the overwhelming body of scientific evidence now available, the Caribbean has every reason to be deeply engaged and unified in its approach to these meetings.

As recent dramatic climate events have demonstrated – from the unseasonal storms that struck the Eastern Caribbean last Christmas causing damage and the loss of life, through the drought conditions that prevailed this summer in Jamaica affecting 20,000 small farmers, to the bleaching of the region’s coral reefs – climate change is real.

The Caribbean’s case is amongst the most pressing in the world. Although the region is a minute contributor to global greenhouse gas emissions, it is amongst those that will be most severely impacted.

In common with other small island states in the Pacific and Indian Ocean, virtually every Caribbean nation is at risk from rising sea levels as a consequence of global warming. This is because virtually all of the Caribbean’s major infrastructure, its utilities, and the industries that contribute the most to employment and GDP, are located on low lying coastal plains within five miles of the sea or, in some cases, are below sea level.

As the Caribbean Community Climate Change Centre (CCCCC) has pointed out, countries like Guyana and Belize are most likely to suffer the greatest losses in absolute terms; that the costs of global warming within the Caribbean could run to 14 per cent of GDP by 2025, increasing to 39 per cent by 2050 and 63 per cent by 2100; and that rising sea levels and temperatures may present, in some cases, insurmountable challenges to food security, tourism, and health.

Other warnings from the CCCCC are just as stark. Of the region’s 40m population, it notes 70 per cent live in coastal areas. Tourism, which almost entirely depends on coastal resources, represents for many states up to 70 per cent of GDP, and commercial agriculture, which accounts for much of the rest, is equally dependent on the climate.

According to the CCCCC, farmers would experience a reduction in production of rice, beans and maize of between 12 and 20 per cent if there were to be a 2°C rise in atmospheric temperature; a far from distant threat when Caribbean sea temperatures are already showing a 0.8°C increase and will rise further by the end of the century.

Unfortunately the Caribbean has not been globally active in making its hard to argue against case, or joined up in its international outreach in the run up to the meetings in Lima and Paris.

So much so that North American and European diplomats note privately that as one of the region’s most at risk from climate change, they would have expected heads of government and senior

ministers to be taking a much higher and more joined up approach internationally in attempting to coordinate their position with nations that are sympathetic.

Many Caribbean heads of governments included the problems facing small island developing states in relation to climate change in their individual remarks to the UN General Assembly. More tellingly perhaps, it seems at a regional level to have been left to Jamaica’s Minister of Water, Land, Environment and Climate Change, Robert Pickersgill, to urge in the last few weeks Caribbean leaders to develop a joint strategy on climate change issues, and to have a stronger voice in the international arena so as to “give credence and value to the negotiating positions” of the Caribbean Community in the international community.

Despite this, it is far from clear whether the Caribbean as a whole has a single strategy to take advantage of the opportunity that it now has to benefit materially from a new legally binding climate change agreement in 2015.

Nor is it clear that the region has understood or is willing to react publicly to the historic announcement by China’s President, Xi Jinping, and the US President, Barack Obama, that they are prepared to commit their nations to a target for cuts in carbon emissions; an announcement that has changed fundamentally the dynamics of the fraught politics surrounding growth, development and climate change.

Their agreement was in effect a signal to the world that a global agreement next year may now be possible, even though some experts suggest that what the two nations are prepared to agree to may still not be enough to prevent an increase in global temperatures.

Last year the International Monetary Fund (IMF) published a report that made clear that ‘small states in the Caribbean should be seen as frontline candidates for support from climate-change funding, as global strategies for mitigation and adaptation to climate change become operational’.

However, this in itself presents challenges in this context following the graduation by multilateral institutions of all of the region other than Haiti to being middle income nations. So much so that the issue needs to be addressed globally, and the case made more widely in the context of climate change vulnerability, that the region’s heavy indebtedness warrants greater access to concessionary loans and grants.

If the Caribbean is to achieve this it has to become much more closely engaged in the detail, in developing a high level international profile, and a much more intimate political dialogue with among others China as well as other key players in the region, old and new.

Even though it is very late in the day, the Caribbean needs to demonstrate why, as a low carbon emitting region that is dependent on the environment for its future prosperity. It should be a major economic beneficiary from any final climate change settlement.