News Americas, WASHINGTON, D.C., Tues. May 23, 2017: The Donald Trump administration on Monday seemed to grudgingly grant a maximum six-month Temporary Protected Status extension to some 50,000 Haitians in the US. But the extension came with a clear warning from the Department of Homeland Security – “use the time before Jan. 22, 2018 to prepare for and arrange … departure from the United States.”

Secretary of Homeland Security John F. Kelly on Monday announced his decision to extend TPS for Haitians immigrants who had originally benefited from the status after the devastating earthquake in the Caribbean nation in 2010.

Then Homeland Security Secretary under the Obama administration, Janet Napolitano, granted an initial 18 month immigration relief to Haitian nationals who were in the United States as of January 12, 2010.

But on Monday, Kelly said he decided “after careful review of the current conditions in Haiti and conversations with the Haitian government” to extend the TPS only “… for a limited period of six-months.” 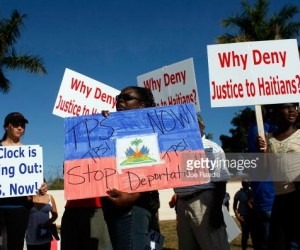 And he had a clear warning for the Haitian beneficiaries.

“This six-month extension should allow Haitian TPS recipients living in the United States time to attain travel documents and make other necessary arrangements for their ultimate departure from the United States, and should also provide the Haitian government with the time it needs to prepare for the future repatriation of all current TPS recipients,” he stated. “We plan to continue to work closely with the Haitian government, including assisting the government in proactively providing travel documents for its citizens.”

The DHS in its statement issued Monday urged Haitian TPS recipients who do not have another immigration status to use the time before Jan. 22, 2018 to prepare for and arrange their departure from the United States – including proactively seeking travel documentation – or to apply for other immigration benefits for which they may be eligible.

“I believe there are indications that Haiti – if its recovery from the 2010 earthquake continues at pace – may not warrant further TPS extension past January 2018,” Kelly stated. “TPS as enacted in law is inherently temporary in nature, and beneficiaries should plan accordingly that this status may finally end after the extension announced today.”

He added that Haiti has made progress across several fronts since the devastating earthquake in 2010, and he is proud of the role the United States has played during this time in helping Haitians.

“The Haitian economy continues to recover and grow, and 96 percent of people displaced by the earthquake and living in internally displaced person camps have left those camps. Even more encouraging is that over 98 percent of these camps have closed,” he added. “Also indicative of Haiti’s success in recovering from the earthquake seven years ago is the Haitian government’s stated plans to rebuild the Haitian President’s residence at the National Palace in Port-au-Prince, and the withdrawal of the United Nations Stabilization Mission in Haiti.”

Kelly said that prior to the January 2018 expiration; he will re-evaluate the designation for Haiti and decide whether extension, re-designation, or termination is warranted.

The TPS program provided temporary refuge for Haitian nationals who were in the United States and whose personal safety would have been endangered by returning to Haiti. The program allowed for qualified immigrants who applied using Form I-821, Application for Temporary Protected Status, and Form I-765, Application for Employment Authorization; paid the necessary fees and completed a back ground security screening, to obtain a one-year Employment Authorization Document (EAD) that allowed them to work and also travel out of the country.

Since 2010, the program has been extended continually, allowing for those TPS Haiti beneficiaries who re-register during a 60-day period to receive a new EAD for one year. This July 22, 2017, the EAD and temporary legal status will run out again.

Haitians for Trump were among many urging Trump to deliver on his campaign promise last September as he courted Haitian immigrant voters at the Little Haiti Cultural Center in Miami.

“I really want to be your greatest champion,” Trump told them then. “I will be your champion, whether you vote for me or not.”

Fanm Ayisen Nan Miyami, a group that has been lobbying for a TPS extension, immediately slammed the six months extension on Twitter.

“Six months is not an extension,” Fanm Ayisen Nan Miyami tweeted. “Our demand was for 18 to 24 month extension. Families are in fear due to an uncertain future. Call the Department of Homeland Security now to #SaveTPS.”