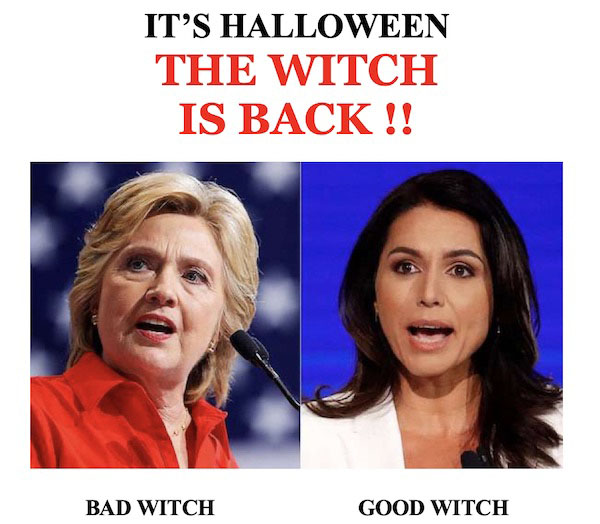 News Americas, NEW YORK, NY, Fri. Oct. 25, 2019: Why should we have expected anything else from Hillary Clinton?

How could she not resist coming back for HALLOWEEN to scare us all?  And to make it better, Hillary has also created a GOOD Witch. Her opposite.

What is a Good Witch? Any woman Hillary viciously attacks! They become the ANTI-Hillary we need for Halloween and all year round!

Will they trick or treat together? NO. Hillary will stick with her WARLOCK husband Bill Clinton, the SCARIEST couple ever! His costume as expected will be as an Old Sex Offender. They are the team from Hell for Halloween.

Hillary has one big problem for Halloween. She is probably going to wear her usual Witch costume, which is anything she wears any day of the year, and the face and hair to match. But she is considering another good choice – dressing up as a computer server locked up in a closet in her house!

Why am I even bothering with Hillary? Good point. I had no choice! She is trying to scare us all to death by threatening to RUN again. There is something in it for Bill too; he can hire more young female interns to “educate!”

Yes, I will get to the Good Witch later, but she only has a minor role here. What I want my readers to focus on is that with a large field of interesting Democratic Party candidates for President representing a wide spectrum of views, all regions of the nation, both White and Black and Latino, Female and Male candidates, Young and Old, Gay and Straight ….

Still Hillary Clinton is considering entering the Democratic Party race for President to DESTROY it. I pray all my readers understand what this means HILLARY CLINTON IS INSANE and yes, LOCK HER UP. No not in a prison but in an INSANE asylum for her own and most of all, our protection.

There is no “better” way on Earth or in any known or unknown universe to re-elect Donald Trump President than for Democrats to lose all their minds and nominate someone even more despicable than Donald Trump.

Wait a second. Guess who else just arrived for Halloween? Another very SCARY figure – Michael Blomberg, who is yes, yes – he is # 8 on the current list of the richest billionaires on Earth. LUCKY him. Get it? LUCKY him.

Michael Bloomberg is good for one thing as PROOF of WHY we should not have billionaires. Even though Old Mike is so rich he can buy anything, and often does, he is still not satisfied being that rich – all those $35 BILLIONS and counting is not enough to satisfy Mike or make him happy.

Since he successfully purchased being Mayor of the Capital of the World – New York City for 12 years – he just can’t stop wanting MORE. Now it’s the American Presidency Or as he would put it, saving America. With his Super INFLATED Ego – because Bloomberg thinks he must be so, so smart because he is so, so rich – he feels it is his right to claim the American Presidency.

The real reason Bloomberg is so, so rich is that the rest of us must be so, so stupid that we allowed him to get so, so rich that he now believes he is so, so smart.

What Michael Bloomberg is, is the beneficiary the VICTIMS of what is a criminally UNFAIR system that has 99% of the wealth and power we all create go to the very GREEDY few like Michael Bloomberg who is a financial ABUSER of the system.

Focusing on Halloween this episode, I now propose that Michael Bloomberg join Hillary and Bill as a triple THREAT for Halloween and trick or treat together especially in SWING states. Hillary dressed as a computer server in the closet, Bill as an Old Sex Offender hiring interns, and Mike as a very BIG Air Bag stealing candy from kids to satisfy his insatiable appetite.

Plan B is that all three dress up as CLOWNS. Why, because they are!

As for Tulsi Gabbard, she deserves the admiration of everyone, simply for being the target of Hilary Clinton’s HATE. That is what is called a BADGE OF HONOR. Most of us can only dream that the Old Witch would honor us with her HATE, but Tulsi Gabbard, a distinguished military veteran and active member of the Reserves unlike phony patriot like so called Mayor Pete.

Tulsi Gabbard, unlike you and me, is good enough to be Hillary’s vicious target. In fact, in Hillary’s very warped mind, Tulsi is a Russian asset. Hilary know what a REAL Russian asset is because if in some frightening bizarre real life fantasy she ever again somehow became the Democratic Party nominee for President, she will insure Democrats lose the Presidency again. Call Hillary what she is – the kiss of DEATH for all of us.

SHAME on those who chant at Trump campaign rallies to LOCK HER UP in prison. NO. LOCK UP HILLARY for both her good and ours in an insane asylum for the morally corrupt and elite political hacks destroying America.

As for me, I want to go trick & treat this Halloween with the Good Witch Tulsi Gabbard, even if it means being chased by a computer server locked in a closet, an Old Sex Offender looking for interns to educate, and a giant Air Bag trying to steal candy from kids.

Make this a Halloween to remember!

Can Medical Cannabis Save The Barbados Economy?

Haiti a Step Closer to Having Army Again