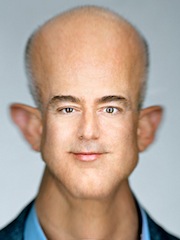 And Washington is doing nothing to protect us.

Sorry, this episode is not going to be about the Mueller’s  “investigation.” Let everyone else write about it and the two opposing fantasies.

On the Far Left that Trump was Putin’s Manchurian candidate and Muller is going to lead to Trump’s impeachment and removal. And on the Far Right, that Mueller is nothing but a front man for a conspiracy by the Democratic Party Elite to pull off a coup and the removal of Trump and declaring Hillary Clinton the Real President.

This is the non-stop stuff of Fake News channels CNN and Fox News.
Either scenario is farfetched but although not completely impossible,  I don’t care right now.

This week’s episode is about a far greater and REAL dual  threat as pictured above – Mark Zuckerberg and Jeff Bezos in mug shots.

The Mark Zuckerberg threat to America is more direct and immediate but do not discount the havoc Jeff Bezos can wreck on the United States by continuing to take control of more and more industry sectors.

Both are two greedy billionaires in it for the money at any price to the rest of us. They are every bit the new age Robber Barons; just like those of long ago who brutally controlled railroads, steel and oil. These new Robber Barons control the online world along with Google’s and Twitter’s founders.

I’ll leave Google and Twitter aside here. I only have so much time and ink and Zuckerberg and Bezos are the ‘baddest’ of these Very Bad Boys

First my disclaimers. I do not use Facebook but I might if I had good reason, and yes like you I am an Amazon customer and will continue to be.

First Zuckerberg and Facebook – the greatest threat of all …

It is ironic as comical as it is, Zuckerberg’s fantasy now crushed, was that somehow he was going to get elected the youngest ever President of the United States in 2020.

He had hired Obama’s chief henchman David Plouffe; you can only imagine for how much $$$$ to run the so called Zuckerberg Initiative – the only slightly veiled Zuckerberg political apparatus that would morph into a Presidential campaign later following Zuckerberg’s ballyhooed recent national  “tour” to meet and greet average Americans across the nation.

Give us a break Zuckerberg! All you are is one very, very lucky, accidental wildly successful entrepreneur with dreams of grandeur who is now DANGEROUS.  The reason Zuckerberg is dangerous is the very reason he thought he could get himself elected President – until recently that is.

Mark Zuckerberg controls Facebook, which is by far the largest and most powerful BROADCAST network in human history and with the ability to MANIPULATE news and the billions of Facebook users no other broadcaster has ever come close to today or ever before.

It gets worse for the rest of us as Facebook just keeps getting bigger and more profitable and Zuckerberg richer and richer and all without Facebook being allowed to operate in the biggest market of them all – China –  but soon!

Sorry why does it even get worse because Facebook unlike any other broadcaster is psychologically addictive for users that’s right ADDICTIVE. Why else do you think you see an endless flow everyday so called intelligent men and women of every age, income level, race and nationality unable to take their cell phones out of their hands and away from their eyes.

It is obvious when they are NOT making phone calls with their phones; they are transfixed on the screen. What they are looking at most of all is their Facebook feed. So addicted, many continue to do so walking down stairs not looking where they are going, crossing the street cars speeding by, standing in crowded elevators, anywhere, anytime – Facebook all the time!

There is a name for this psychological ADDICTION. Countless Americans and others around the world are “hooked” on Facebook.

Yes, time to bring in RUSSIA. I know you’ve been waiting for it, even more you Comedy News Network (CNN) junkies …

It is very unlikely Trump and the Russians colluded but we certainly know who did COLLUDE in the last Presidential election; it was Mark Zuckerberg’s Facebook and the Russians who combined to fill the most powerful broadcast network the world has ever seen with FAKE news!

To be precise, FAKE news with a big asterisk since it was “news” about Hillary Clinton whose life and campaign is filled with FAKE news. But that does not matter here or now; what does matter …

Is the UNCHECKED POWER of Mark Zuckerberg and Facebook and why this otherwise bland very rich nobody had some reason to think he might have gotten elected President by filling Facebook with his own endless FAKE news and overwhelm the election and all the Facebook addicts.

But it gets worse …

Facebook’s power to control millions, even billions of human minds, goes much deeper still. It has more personal and very useful information about ALL Facebook users which increases further every moment a Facebook user is online and gathering information about more individuals than any entity in all of history combined with the most sophisticated ever more potent algorithms and software ever created, constantly analyzing and categorizing that information so each Facebook user can be very selectively targeted in ways that will be the most irresistible whether it is products OR politics !

Now I am neither naïve or overly critical; this is reality and will be in our ever more electronic world; let the buyer beware EXCEPT for this …

It is highly DANGEROUS for Facebook NOT to be regulated when it comes to political advertising. Why have traditional broadcast TV and radio always been subject to government regulation logically requiring political advertising sources and material being clearly identified both to the broadcaster and the viewer or listener but there is absolutely NO such supervision or requirements for Facebook most of all, but also Twitter, Google, Amazon or the various  other larger now more important Internet broadcasters.

By the way this situation is BAD here in the U.S. but it is completely out of control because of Facebook in much of the rest of the world. Facebook is being manipulated in so called third world countries by terrorists and others to cause political and ethnic havoc by placing lots of FAKE news on Facebook.

So Facebook and the others were hauled in front of a U.S. Senate committee this week but Zuckerberg and the other Top Guns did not have to show up and didn’t. They were allowed to send their very slick high paid lawyers.

Why? Because they are so rich and powerful and the new darlings of the political elite who want their $$$$$ and are also so fearful of annoying Zuckerberg and the others because they could be DESTROYED on Facebook.

So what did these U.S. Senators do at their hearing this week?. They politely asked Facebook and the others if they would try to better police themselves and their political advertising; if that would not be too bothersome or expensive to do; which it is in their minds because it is all automated!.

What  the senators did not do is tell them Congress will pass legislation at once subjecting Facebook and the others to the same exact laws and regulations concerning political advertising that ALL the traditional broadcasters like CBS, NBC, ABC, and the many the lesser broadcasters must all adhere.

That about says it all for me and this episode of Trump’s America.

A for Jeff Bezos and Amazon – they are a very big threat in a different way but also keep in mind increasingly an Internet  BROADCASTER as well; anyone have Amazon’s  Fire TV? Full disclosure I do. Watching it right now!

Consider this episode just a  “teaser” for Jeff Bezos; sorry Jeff and Amazon – eating the world of retailing and more taking over or threatening to take every retail sector in its path now groceries and also soon prescription drugs and very much on its way to being the largest MONSTER company on Earth.

Did I scare you this episode? Better worry about yourself if I did not!

(This entire series is dedicated in honor of Liu Xiaobo)