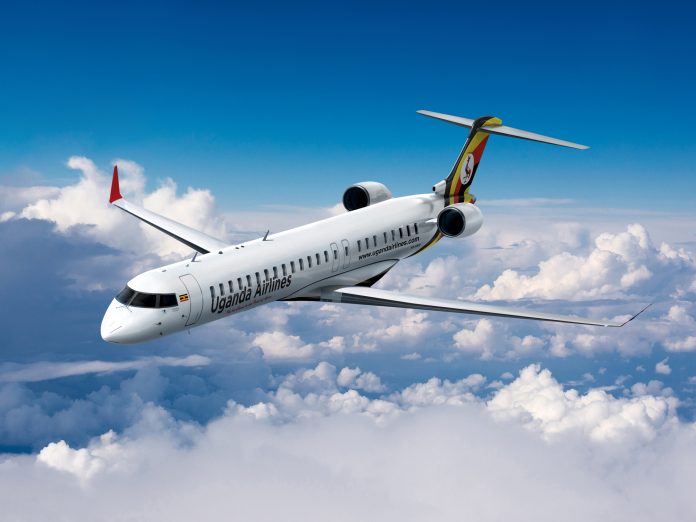 Based on the list price for the CRJ900 aircraft, the firm order is valued at approximately US$190 million.

“We congratulate the Government of Uganda for the revival of its national flag carrier, and are thrilled that the new airline has selected Bombardier and the CRJ900 regional jets for its upcoming debut,” said Jean-Paul Boutibou, Vice President, Sales, Middle-East and Africa, Bombardier Commercial Aircraft. “Recognized for its superior economics and efficiency, the CRJ Series aircraft have enabled airlines worldwide to serve communities with better connectivity, and we look forward to supporting the development of Uganda’s regional air travel with these CRJ900 regional jets.”

Uganda Airlines will operate the CRJ900 in dual-class configuration with 76 seats, including 12 first class seats.

“We are delighted to have ordered the world’s leading regional jet, and we look forward to providing the most modern passenger experience in regional aviation to the people of Uganda and across Africa,” said Ephraim Bagenda, CEO, Uganda National Airlines. “As we were establishing Entebbe as a strong hub in East Africa and building more connectivity in Africa, we thoroughly reviewed our needs. With its proven track record in Africa and other regions of the world, we are confident that the CRJ900 aircraft will help us succeed.”

About the ATMOSPHÈRE Cabin
The new ATMOSPHÈRE cabin sets new standards of passenger experience in the regional jet market segment. Key features of the new interior are comprised of larger passenger living space, wheel-first roller bag capability, more spacious lavatory, increased cabin connectivity options, all integrated in a contemporary design and material choices. In fact, the ATMOSPHÈRE cabin design allows passengers to carry and store an “oversized” roller bag within the aircraft cabin bins which minimizes the need to check bags at the counter or the gate. To learn more: DiscoverAtmosphere.com

About Bombardier
With over 69,500 employees across four business segments, Bombardier is a global leader in the transportation industry, creating innovative and game-changing planes and trains. Our products and services provide world-class transportation experiences that set new standards in passenger comfort, energy efficiency, reliability and safety.

Headquartered in Montreal, Canada, Bombardier has production and engineering sites in 28 countries across the segments of Transportation, Business Aircraft, Commercial Aircraft and Aerostructures and Engineering Services. Bombardier shares are traded on the Toronto Stock Exchange (BBD). In the fiscal year ended December 31, 2017, Bombardier posted revenues of $16.2 billion US. News and information are available at bombardier.com or follow us on Twitter @Bombardier.

Notes to Editors
Images of CRJ900 in the livery of Uganda National Airlines are posted with this news release at www.bombardier.com.

The CRJ900 aircraft backgrounder is available in the BCA Media Hub

Bombardier, CRJ900 and CRJ Series are trademarks of Bombardier Inc. or its subsidiaries.