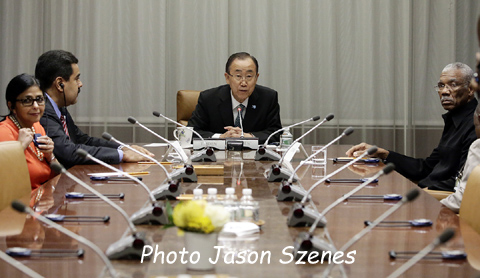 The UN’s intervention comes after months of public disagreements between the two sides over the area known as Essequibo which Venezuela continues to claim ownership of.

The talks got as far as an agreement to accredit Cheryl Miles asGuyana’s Ambassador to Caracas while Venezuela said it will return Ambassador Reina Margarita Arratia Diaz to Georgetown.

“The two Presidents expressed willingness to continue to engage in dialogue, and announced during the meeting that they would receive their respective ambassadors in order to ensure a return to fully fledged diplomatic representation in both capitals in the nearest future,” the UN Secretary General’s office said in a statement.

After shaking hands at the request of the UN Chief, the trio met for about one hour during which Guyana pressed its case for the border controversy to be taken to the International Court of Justice (ICJ) for a lasting settlement.

However, the UN Secretary General did not make any decision in that regard during the talks. Instead, according to Granger, the UN Chief preferred to first receive an assessment from a UN team that is expected to visit Venezuela on a fact-finding mission. A similar team has already conducted a visit to Guyana.

“The Secretary-General praised the willingness of Presidents Granger and Maduro to uphold their countries’ tradition of dialogue while a path toward resolution of the controversy is crafted that will be beneficial to both countries and their peoples,” Ban’s office said.

Tensions between Guyana and Venezuela have soared in recent months ever since American oil company, Exxon-Mobil, discovered a huge deposit offshore Essequibo, a mineral and forest rich region that Venezuela claims.

Man who stabbed ex-wife to death turns self in