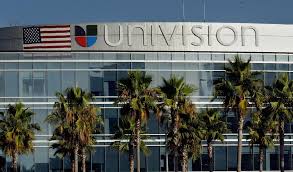 Univision on Tuesday described the lawsuit brought by Trump “both factually false and legally ridiculous.”

“We will not only vigorously defend the case, but will continue to fight against Mr. Trump’s ongoing efforts to run away from the derogatory comments he made on June 16 about Mexican immigrants,” a Univision spokeswoman said.

In a lengthy statement he accused Univision of engaging in a “politically motivated attempt to suppress his freedom of speech under the First Amendment as he begins to campaign for the nation’s presidency.”

The lawsuit comes as Univision last week announced it will end its deal with the Trump Organization that gave the network the rights to broadcast Miss USA in Spanish.

But according to Trump, who is a partial owner of both the Miss USA and Miss Universe pageants, Univision “is required to broadcast the pageant live” when it is held next month in Baton Rouge, Louisiana.

NBC Universal, meanwhile, has also ended its business relationship with Trump meaning the network will also not air Miss USA and Trump will no longer appear on the network’s reality show “Celebrity Apprentice.”

Both co-hosts of the UniMas telecast also pulled out last week from the pageant as did Colombian singer J Balvin who was set to perform at  the pageant.

And Carlos Slim, the richest man in Mexico and one of the wealthiest in the world, dumped The Donald following his anti-Mexico rant.

“We can confirm that we were working on a television project with Trump that has been dropped,” a spokesman for Ora TV, Slim’s television production studio in Mexico, told CNNMoney.

During his presidential campaign kickoff speech, Trump said Mexicans are bringing drugs and crime to the U.S. and Mexico is also sending rapists.

He also called for building a wall along the southern border of the U.S. The remarks drew condemnation from the Mexican government as “biased and absurd.”

Trump has defended his criticism as directed against U.S. policymakers, not the Mexican people or government and said that Univision would be defaulting on its contract if it doesn’t air the pageant and he would take legal action.

On Tuesday, Trump’s tone switched saying  in New Hampshire he can learn from them and he loves “Mexicans.”

US Secretary Of State Touches Down In Suriname, Guyana

Food in Ecuador: a lesson in diversity – The Guardian

The Weight of the World Rests on Brazil – New York Times

Notorious Drug Lord Could Be Back In Guyana In A Year